Tell Us A Story 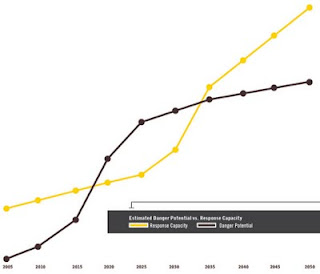 The future is unknowable, though not unimaginable.
Ludwig Lachmann

I'm a big fan of storytelling, as I've noted before. So I was delighted to read a paper (pdf) by Anthony Evans on the theme of 'Economic imagination and the financial crisis 2007-2012' (ht Stumbling and Mumbling). Evans makes the point that:

At a very simple level, it is simply anti-intellectual to give credence to economic predictions. Economics is not predisposed towards generating robust forecasts and a host of compounding factors make the only attainable goal to be the “least worst” forecaster. The most difficult task for the economist right now is to resist the invitation to make predictions about the future state of the economy.

Instead, Evans suggests that economists should tell stories (i.e.: scenarios) rather than present forecasts. And he has a go himself, starting with some entertaining 'counterfactuals' which amount to an historical 'what if' approach to the recent crisis and decisions that were made or not made. Which got me thinking: what if the Irish banks had not been rescued last September ... would we be worse off now as a result? Or better off?

And I think the thrust of his commentary is right: there are certain things economists know about how the world really works, and the challenge is to apply these lessons credibly to our thinking about the consequences of different decisions (private and public). And economists do know some things, as I was reminded by this great quote from the late Arthur Seldon:

Production takes place for consumption (derived from the Scot Adam Smith), not the other way round. Value is measured not as an average but at the margin (the Englishman W. S. Jevons, the Frenchman Leon Walras, and the Austrian Carl Menger). The cost of producing a commodity or service is not the labour required (the German Karl Marx) but the commodity or service thereby lost (the Austrian Friedrich von Wieser). The instinct of man is to “truck and barter” in markets (Adam Smith). He will find ways round, under, over or through restrictions created by government (the Austrian Eugen von Bohm-Bawerk). There is no such thing as absolute demand (for education, medicine or anything else) or supply (of labour or anything else) because both vary with price (the Englishmen Alfred Marshall, Lionel Robbins and many before and since). Not least, without the signalling device of price, man cannot spontaneously and voluntarily co-operate for prosperous co-existence (the Austrian Ludwig von Mises and the Austrian-born but voluntarily-British Friedrich Hayek).

Think of it as a toolkit for economic thinking (and story telling). I find that, as a rule, it's easy to be optimistic about the long term - it's the short to medium term that always presents difficulties: when our capabilities might be overwhelmed by potential threats. Mike Treder has made a similar point - the chart is from a recent article in which he warns about the risks of overlooking mid-range dangers. As he puts it:

Let’s define the short term as the next five years. It’s almost certain we won’t have flying cars by then, or a colony on Mars, or a pill we can take to cure all diseases. Of course, we might be well on the way to having online access everywhere all the time, and that could be quite useful, but it’s unlikely that people will see anything within the next five years that will knock their socks off.

What about the long term — say from 50 to 100 years? How much technological, social, and political change should we expect to see in that time frame? Given the vast differences in the world today — in all three of those realms — as compared to the lives of people from early in the last century, it seems beyond argument that enormous changes are in store.

... All of that is predicated, however, on our ability to get safely past the formidable barrier of the midrange — the period around five to twenty years from today. What happens during the mid-range is very likely to determine whether the remainder of this century will be one of unparalleled abundance, devastating war and destruction, of warming-induced ecological collapse and mass deaths, or perhaps some miserable but survivable combination thereof.

Maybe that's why we need to tell stories: to help us imagine the unknowable, and to be better prepared to deal with it when it comes. A task that should not be left to economists alone of course.
Posted by Gerard O'Neill at Tuesday, September 01, 2009