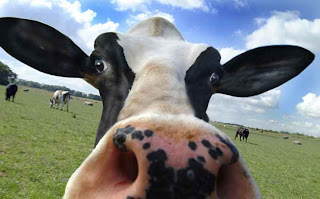 This is getting silly: first the Love Irish Food initiative that sounded a bit vague on the definition of 'Irish', and now the National Dairy Council initiative that defines Ireland as the Republic only (ht Slugger O'Toole). Someone should tell them we're in a Single European Market - and have been for some time now. Here's a reminder, from the European Commission:

The risks vary by product sector. Pharmaceuticals and construction products obviously present higher risks than office equipment or pasta for example. In order to minimise risks and ensure legal certainty across Member States, EU legislation harmonising technical regulations has been introduced in particular in the higher-risk product sectors.

I'm guessing milk and butter are closer to the pasta end of the risk spectrum.

But these kind of petty protectionist measures are not just silly, they're potentially very dangerous. Just look at the recent spat between the United States and China over tyres and tarrifs. Further evidence of regime capture (in the US) by lobbyists (this time, the steel workers union). As Willem Buiter points out:

A trade war in a global economy trying to escape from the worst downturn since the 1930s is the single event most likely to trigger a renewed collapse of global economic activity. The usual protectionist suspects in Europe (including, you guessed it, president Sarkozy of France) are already chomping at the bit to impose carbon tariffs on imports from China and India - an act that would be as close as you can get to open economic warfare short of blockading the ports of Mumbai and Shanghai.

Clearly, the qualities one needs to get elected to high office in western democracies are not qualities that are likely to be helpful once you have achieved high office and are expected to govern and lead. To survive the selection process to become president you have to be able to stitch together a coalition of special interests that can provide sufficient financial and sweat equity resources to win this grueling race to the top. Once you get there, you should shed the unfortunate baggage you accumulated on your way up and govern in the interest of all the people. Few can do that. Apparently Obama is not one of them.

People often lament we don't have an Obama in Irish politics. In light of this recent development it's probably just as well. Still, if only we had an Obamaesque minister responsible for the National Dairy Council who could put a stop to this nonsense right away. Hmmm, then again ...