The Thrifty Shall Inherit The Earth 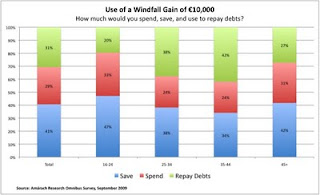 I was at the 2009 CS Lewis Lecture last night on the theme of "Can Capitalism be Healed? - Market Ethics and the Virtue of Thrift". It was held, appropriately enough as everyone noted, in the Institute of Bankers. The main speaker was Dr Peter Heslam, who enlightened us (me certainly) on the true meaning of thrift.

He explained the meaning of thrift post the banking crisis thus:

Literally, this word [thrift] means ‘prosperity’ or ‘well-being’, meanings encompassed in shalom, the Hebrew notion we encountered earlier that is broader than material wealth and is central to the scriptural theme of redemption. While short term measures had to be taken to save the banks from total collapse, it is hard to see how the crisis can be resolved, and further crises avoided, in the long-term, without the recovery of this virtue.

Peter went on to use the Parable of the Talents to explain the virtues of enterprise, entrepreneurship, innovation and plain-old-fashioned capitalism: far removed from the leveraged, debt-fuelling financial engineering that got us where we are today. Mind you, it's never quite explained how exactly the good servants doubled the value of the talents entrusted to them by their master in so short a period of time ...

On the other hand, the poor old servant who stuck his money in a low-interest bearing deposit account/hole in the ground got severely punished we are told. Sort of sounds like a blessing on all speculators/curse on all savers sort-of-parable to me :-)

And yet the future belongs to the savers: to those who are thrifty in the conventional sense of the word. That said, savers are a) being blamed for getting us into a financial crisis by losing their thrifty habits during the boom (as argued in a recent Bank of England analysis); and b) are being singled out as the main culprits in prolonging Ireland's recession due to an over-reaction to rising unemployment (as argued in the latest Davy economic commentary). But there is no turning back the clock: a new generation of lifelong savers will emerge from this recession with profound long term consequences for Ireland's future growth path.

I recently added a question to my company's monthly omnibus (an online survey of 1,000 adults in the Republic of Ireland) about the issue of savings, debt etc. I posed the question: "If tomorrow you receive a tax free, windfall gain of €10,000, how much of this would you spend, save or use to repay debts?" The chart shows the responses: on average Irish consumers would save 41% of their windfall, spend 29% and use 31% of it to repay debts. I have also shown the responses by age group (there were no significant gender or social class differences). The people most like to save are the young (16-24 year olds); and those most likely to repay debts are those aged 35-44.

In the medium to long term, the population of 30- and 40-somethings is set to grow strongly in Ireland (as noted previously). If that translates into a combined generational/lifestage ethic of savings (and debt repayment), then the prospects for consumer spending returning to anything like the levels at the start of this century are weak indeed.

Ireland is not along in this regard. Despite an increasing stream of positive news stories about the US economy, Americans are stubbornly insisting on increasing their savings ratio to levels far in excess of those in recent times. Beyond short to medium term responses to the shock of the recession, it does appear that rising savings and constrained consumer spending are among the leading economic megatrends shaping all our futures.

It seems that Ireland's consumers - and the US and UK consumers - have indeed recovered the virtue of thrift as we end the first decade of the 21st century. Quite what impact that will subsequently have on the shape, speed and sustainability of the Recovery remains to be seen.
Posted by Gerard O'Neill at Tuesday, September 29, 2009