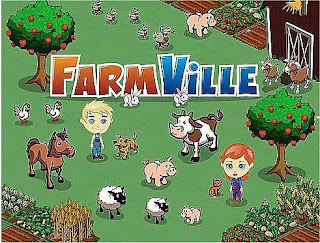 I was suprised the other night to discover that my daughter is big into farming. Not least because we live in South Dublin. She's growing vegetables and looking after a fine herd of cattle - as are all her friends who live nearby. Of course it's all done virtually: FarmVille is the latest craze to sweep Facebook.

But like all crazes there's usually some interesting, underlying drivers behind it all. The obvious one is social networking itself - 43% of Irish internet users have their own Facebook or Bebo page, and most young people under 2o don't even use email anymore as it's sooooo Web 1.0. And yes, Web 2.0 is changing business practices - but even McKinsey have to admit that a lot of businesses are still struggling to come up with any measurable benefits (though most are still committed to expanding practices like blogging and podcasts further).

But it seems to me that the biggest change has been to give a greater voice to the 'audience': which, if you are prepared to listen, can be a powerful source of customer intelligence (as PwC remind us) - and if you're not prepared to listen it can be a powerful source of customer defections (as United Airlines have discovered). For myself, I've been blogging here for two years (as of today in fact) and reader feedback both online via comments and offline has been one of the most rewarding aspects of the blogging experience.

Where to next? I tried twitter for a few months a while back and gave up - too many tweets, too little time (though I take RSS feeds from my favourite tweeters such as Ireland's most web 2.0-enabled economist Stephen Kinsella). And in truth I'm more interested in how the web will affect the lives of people working real allotments rather than the virtual kind.

Looking at studies such as those by McKinseys and PwC it's still hard to see a precise role for Web 2.0 in a Recovery 2.0 - though I think it will play a significant part eventually (especially in terms of reducing costs and ultimately boosting productivity). And so maybe it will be a more robust and more sustainable recovery for all that.

And here's a nice YouTube video to remind us just how big Web 2.0 is already (with the by now mandatory Fat Boy Slim sound track :-)