The Women of Ireland Will Save Lisbon 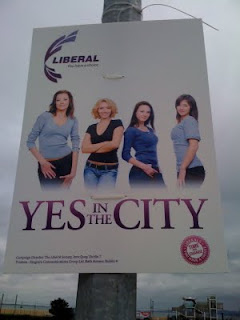 My guest Lisbon Essay has been posted over at Slugger O'Toole.

Just as the women of Ireland brought down the first Lisbon Referendum, so I believe they will see the second one succeed this time round. That said, I do think both sides of the current campaign have somewhat failed to directly address the female voter.

Mind you, my essay 'went to press' before I snapped this poster in Booterstown. Very definitely aimed at the female voter. Though I can't help feeling it's a spoof - like something The Onion would produce - or a fiendish plot by the No campaign. It's produced by The Liberal Society, whose web site definitely looks like something from The Onion.

But how could it be fiendish? What if it's a clever attempt to turn all those men who've had to endure too many episodes of Sex in the City against Lisbon. I mean, there's only so much a man needs to know about Manolo Blahnik shoes (er, nothing?)

Email ThisBlogThis!Share to TwitterShare to FacebookShare to Pinterest
Labels: Lisbon Referendum, Sex and the City, Slugger OToole, The Liberal Society, The Onion