Bring Back the Border? 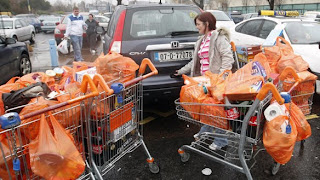 Instead of encouraging people to 'buy Irish' wouldn't be easier to just put the border back instead? A rhetorical question. But I worry about the logical consequence of Love Irish Food type initiatives for an economy that is one of the most dependent on trade in the world. If we stop buying foreign stuff and foreigners stop buying our stuff then, er, whose going to come out worse from that particular stand off I wonder?

But that kind of thinking can land you in really weird places. In a post on Slugger O'Toole I report that nearly two fifths of consumers in the Republic of Ireland agree with the suggestion that 'the government should discourage people shopping across the border by introducing special taxes on goods bought there'. A saner 50% disagreed.

I mean, re-introducing border controls in order to tax Southern shoppers coming back from the North would be insane. Sure that would be as mad as increasing vat rates in the Republic of Ireland just as the UK government cuts theirs. Nobody would be that silly surely?
Posted by Gerard O'Neill at Thursday, October 01, 2009