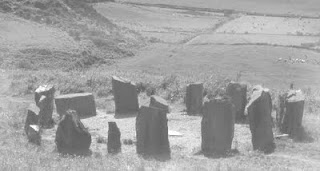 Maybe it's the time of year, but I'm worried that the powers-that-be have taken to believing in magic. Paul Saffo, one of my favourite futurists, makes a telling in point in a recent interview:

Conflict is inevitable. Take the looming environmental crisis. “The argument is shaping up to a monumental scrap between two ommunities: the druids and the engineers,” said Saffo.

“The druids say, ‘Look, the solution is we have to turn the clock back, go more lightly on the land’. The druids tend to be pessimists — everything dies.

“The engineers say the way out of this crisis is to engineer our way out. Engineers are by nature optimists. ‘Give me enough resources and I’ll take you to the moon.’ ”

Saffo is not one to offer easy solutions. “Druid versus engineer is going to be the debate of the 21st century. I’m a sceptic of both camps. We can’t go back, it’s too late; and yet engineering is what got us into this trouble. There has to be a middle ground,” said Saffo.

Although he was talking about the climate change debate, I thought Saffo's points were especially apt for Ireland, including the debate about NAMA. The continuing fiasco of foisting a wildly optimistic, potentially-suicidal 'solution' on an increasingly reluctant, tax-paying electorate reads just like a debate between druids and engineers. Only worse, it's more like a conspiracy: the druids in the Green Party are in cahoots with the too-clever-by-half financial engineers advising Fianna Fail and the Department of Finance. That's going by Peter Matthews description of last night's Leviathan gig.

Trick or trick everyone?
Posted by Gerard O'Neill at Thursday, October 29, 2009