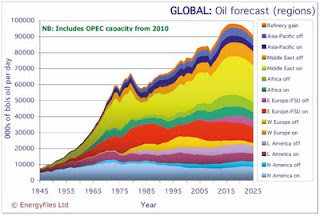 I've written a few times about Peak Oil, though not recently. It's one of those issues where I find myself curiously on the side of green movement rather than that of free market advocates. The latter in my experience tend to dismiss concerns about Peak Oil on the basis that oil exploration companies and the impact of rising oil prices will drive exploration and innovation to ensure uninterrupted supply. Normally I'd be inclined to agree were it not for the fact that some 85% of the world's oil supply is owned by feudal princes and kleptocrats; and only 15% by the oil majors. I'd be much happier and more confident if it was the other way round. But it isn't. Hence I am more pessimistic about prospects for an uninterrupted supply into the foreseeable future ...

I am not the only one. An excellent new study - The Global Oil Depletion Report - by the UK's Energy Research Centre paints a sobering picture of that country's future vulnerability to Peak Oil, whilst avoiding any ideological pitfalls. And as their next door neighbour you can assume their findings apply directly to us. Here's the key part of their assessment:

The short term future of oil production capacity, to about 2016, is relatively inflexible, because the projects which will raise supply are already committed. Reasonable short-term forecasts for any region can be constructed using widely available public data. The primary issue for the short term is the cancellation and delay of these projects as a result of the economic recession and the
consequent risk of supply shortages when demand recovers.

For medium to long-term forecasting, the number and scale of uncertainties multiply, making precise forecasts of the date of peak production unwarranted. Nevertheless, we consider that forecasts that delay the peak until after 2030 rest upon several assumptions that are at best optimistic and at worst implausible. Such forecasts need to demonstrate either how these assumptions can be met or why the conditions identified here do not apply. On current evidence, we suggest that a peak of conventional oil production before 2030 must be considered likely.

It is more difficult to form a judgment on the timing of peak production in the interim, given the multiple ‘above’ and ‘below’ ground factors involved. On balance, we suggest that there is a significant risk of a peak in conventional oil production before 2020. Given the potentially serious consequences of supply constraints and the lead times to develop alternatives, this risk should be given urgent consideration.

Peak Oil is an economy killer. You can 'solve' a financial crisis by printing money ('quantitative easing'), so long as you are willing to pay the subsequent price (potential hyperinflation). But a sudden-onset oil supply problem that can only get worse is much more difficult to circumvent. The recent NCC Statement on Energy makes a similar point in relation to Ireland:

Globally, the immediate risk to energy supply is not a lack of resources, but rather a lack of investment to extract resources. Massive investment in energy infrastructure is required to maintain the current level of supply capacity, as much of the world’s current infrastructure for supplying oil, gas, coal and electricity will need to be replaced by 2030. Given that oil production has already peaked in most non-OPEC countries, OPEC countries are expected to account for most of this increase in production. The IEA has emphasised the risk that under-investment could cause a supply crunch in coming years as large proven reserves may not be fully exploited and the supply of oil and gas constrained. Ireland is a peripheral nation particularly dependent on oil and increasingly gas for energy consumption; in this scenario of global under-investment Ireland would be vulnerable to security of supply threats.

It's a national security issue. Ireland can't invade oil producing countries to grab some for itself (just as well really), so we have to be smart, flexible and fleet of foot to look after ourselves. This is the strategy advised by Deutsche Bank in a recent report on The Peak Oil Market: Price dynamics at the end of the oil age. They assume that rising oil prices (peaking in 2016) will fast forward plans to increase hybrid cars (including gas-powered) to rapidly reduce demand just as supply starts to shrink. A kind of race to the post-oil age that can hopefully be achieved without too many bumps along the road. A verybrave assumption I reckon.
Posted by Gerard O'Neill at Thursday, October 08, 2009