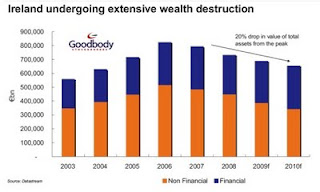 I remember going to an internet conference in New York way back in 2000. There was the usual social gathering for delegates the night before it started, and my colleague and I were chatting about the event when someone approached us and asked 'are you from Israel'? It happened again that night - twice more in fact. I was astonished. Israel? What had they done in the web/technology space compared to Ireland? Little did I know ...

I keep thinking about that whenever I hear someone talking about positioning Ireland as a smart economy. Like, you think we're the first to have the idea? I continue to be impressed by Israel's technological achievements - spurred, undoubtedly, by a not-quite-ideal combination of military necessity and political exigency. But it has worked, as explained in a compelling article about Silicon Israel by George Gilder, who notes:

A 2008 survey of the world’s venture capitalists by Deloitte & Touche showed that in six key fields—telecom, microchips, software, biopharmaceuticals, medical devices, and clean energy—Israel ranked second only to the United States in technological innovation. Germany, ten times larger, roughly tied Israel. In 2008, Israel produced 483 venture-backed companies with just over $2 billion invested; Germany produces approximately 100 venture-backed companies annually. The rankings registered absolute performance, but adjusted for its population, Israel comes in far ahead of all other countries, including the United States.

Now that's smart - and impressive for a population of just over 7 million people. As Gilder points out, a turning point in Israel's smart economic performance was the emergence of a financial sector - especially venture capital - aligned to new technology start ups etc. Which is why I like Chris Horn's analysis presented at today's ComReg conference on Communications for The Smart Economy. It flies in the face of the usual bromides that pass for enterprise policy in this country. The chart contrasts current policy with what he would consider to be a smart policy: 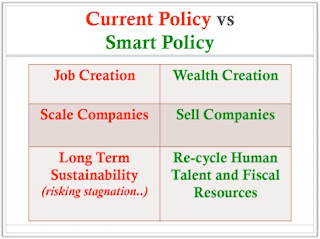 Horn makes the vital connection between financial policy and enterprise policy - like the Israelis did. Only for Ireland he thinks it is vital to create a regular stream of start ups AND trade sales, with the newly enriched sellers then reinvesting a portion of their wealth in the next wave of start ups etc.

Fine in theory (in my opinion), but a little more challenging in reality. The chart at the top of the post explains why. It's from Goodbody's latest analysis of Irish economic prospects. The bottom line: 20% of the country's wealth will have been wiped out by the time the recession ends next year. And most of the wealth we still have is locked into property and property-related assets. We are faced then with a double tragedy: the long-term consequences of a grotesque over-investment in property to the detriment of every other sector during the boom, and the inability to invest adequately in the sectors that could create drive the wealth creation that might take us out of recession.

But all is not lost. Perhaps one consequence of the Global Irish Economic Forum will be to tap some of the same financial and relational capital that served Israel well during the 1990s and past decade. We'll need all the help we can get. Though if all else fails we could just outsource our national IT strategy to McDonalds. They seem to be having more success with it.
Posted by Gerard O'Neill at Friday, October 16, 2009