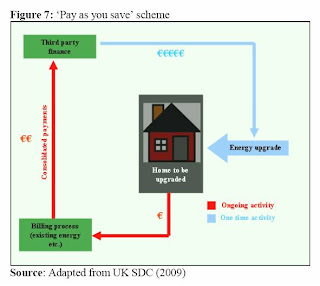 Poor old Comhar. Their Green New Deal report has had much the same unenthusiastic reception as the Government's Smart Economy plan last December. Just follow the dissection (though it feels more like vivisection) in Richard Tol's post about the report on The Irish Economy blog, and the subsequents comments on same.

The Comhar report unfortunately reads like a desk research summary of 'green ideas' folks have tried all around the world. Coupled with a breathless 'we should try this in Ireland too' level of enthusiasm. But ... there are one or two ideas (well, one actually) in the report that I like. It's the 'Pay-As-You-Save' scheme for improving the energy efficiency of homes (explained on page 56, whence I borrowed the chart). As Comhar explains it:

The scheme is predicated on the concept of third party financing the upfront capital costs repaid via a charge on the property rather than the individual. This enables the costs to be spread over a sufficient period so that repayments are less than energy cost savings. The third party financing could come from a financial institution such as a government owned bank or instead from a semi-state energy utility such as ESB or Bord Gais. The savings on energy bills, a ‘standing charge’ is then used to repay the loan each month until the original lump sum (plus some interest) has been paid off.

Though it is heralded as a form of financial innovation (and when the banks aren't lending then I guess any new lending/borrowing scheme rates as 'innovative') it's really just a form of good-old-fashioned hire purchase. Only instead of separate repayments to the utility company, they are simply added to the utility bill instead. With the added benefit of continued savings on energy bills once the repayments are complete.

The good news for Comhar (and any utility company/financial institution willing to try it) is that there is a potentially huge, pent up demand for such a scheme in Ireland. My own company did a survey in August with Construct Ireland and we found that 80% of those responsible for paying household gas and/or electricity bills would actually be interested in such a scheme.

Which is why I am surprised at the National Competitiveness Council's claim in its Statement on Energy released today (see section on energy efficiency, page 26) that:

Energy suppliers are well placed to assist consumers to improve their energy performance and awareness. The CER should incentivise energy producers to improve energy awareness and efficiency among their clients. However, supports and technical advice that improves performance (rather than awareness) of industry (and potentially households) should continue to be State-funded.

This I don't understand. If 'improving performance' translates as 'saving money' then there is no need for the State to fund an initiative such as the Pay-As-You-Save scheme outlined in the Comhar report. Unless of course the banks are still waiting for NAMA; in which case ESB, Bord Gais, Airtricity et al should put the financing of a PAYS/HP scheme out to tender. There's bound to still be a few financial institutions out there (even/especially outside of Ireland) prepared to lend. Or there's always the Credit Unions.
Posted by Gerard O'Neill at Tuesday, October 06, 2009