An Organic Chicken In Every Pot 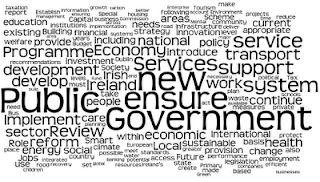 I dropped the text of the 30 page Renewed Programme for Government into Wordle just for fun. Interesting to see the emphasis on 'NEW': not surprising really - they should have entitled it No Fringe Group Left Behind. And I like the word 'ENSURE' - think 'COMPEL' every time you come across it and you'll get the drift.

But like all such programmes for government - and every political manifesto since the dawn of time - the document is high on idealism and low on realism. Sure there's something for everyone (I rather like their idea for electoral reform, so long as it means fewer politicians). But I feel like we've been promised an organic chicken in every pot - as Herbert Hoover might have said - though sadly The Great Depression meant that he never did get to deliver on his promises.

And I suspect that much the same fate awaits this particular programme.
Posted by Gerard O'Neill at Sunday, October 11, 2009