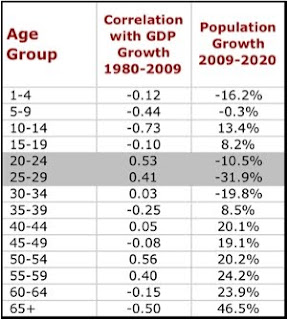 Over the years I've worked on numerous business plans - usually on the 'top line' or demand side of plans (revenue projections etc.) Most business plans look ahead - at best - some 3-5 years. That's a meaningful enough time period to plan something 'impactful', whilst also having some confidence about background assumptions (economic growth etc.) Though even that can be something of a challenge ...

Very few businesses plan ahead 10-11 years: there's just too much uncertainty. Sure if you're building a major production facility you might think that far ahead - though even then you are more likely to be planning for its subsequent 'redundancy' rather than its continued contribution to growth by the end of the forecast period.

But I have worked on a few plans that did look that far ahead - as far ahead as the Draft NAMA Business Plan realeased recently. There have been lots of comments already about its projections (take your pick). For me the key section of the report - and the most alarming - is that relating to Key Risks Facing NAMA on pages 31 to 33. The authors list 8 key risks to their forecasts ranging from the obvious - a prolonged property recession, different valuation outcomes etc - to the less obvious, e.g.: reputation risks and staffing difficulties.

But amazingly for a business plan looking ahead eleven years there is no reference to demography and population trends. To my mind this is the killer risk at the heart of NAMA. This was brought home to me by a fascinating paper by Diane Macunovich entitled The Role of Demographics in Precipitating Crises in Financial Institutions. Here's her thesis in a nutshell:

The hypothesis presented in this paper, which appears to be supported by the data, is that increases in the share of the 15-24 age group lead producers to ratchet up their production expectations and take out loans to expand production capacity; but then reductions in that share – or even declining rates of increase – confound these expectations and precipitate a downward spiral of missed loan payments and even defaults and bankruptcies, putting pressure on central banks and causing foreign investors to withdraw funds and speculators to unload the local currency.

She shows how shifts in the share of younger adult age groups in the total population played a key role in precipitating the Latin American financial crises in the 1980s, the Asian crises in the late 1990s, the Japanese slump over the past decade and, of course, America's great crash of 2008. Intuitively it makes a lot of sense: it's the 20-somethings who form families, buy homes, start jobs (and even companies), and who borrow. Borrow lots in fact.

Is this relevant to Ireland and to NAMA? Hell yes. Following Macunovich I ran a simple correlation between real GDP growth in Ireland (1980-2009) and the year-on-year change in the shares of five year age groups in Ireland's total population. The first column in the table shows the correlation between total growth and each age group's changing share. I've shaded the key 20-24 and 25-29 age groups: sure enough, as in other countries they have among the highest correlations with growth of any age groups. The clincher is in the second column which shows the projected increase/decrease in the numbers in each age group between 2009-2020 (using the CSO's M0F2 scenario as before). The share of 20-somethings in Ireland population peaked just a few years ago (as did growth) and is set to collapse of the next decade (and that's excluding the potential impact of a return to net emigration).

So if we use Macunovich's model to project economic growth over the period of the NAMA plan then the outlook isn't exactly reassuring. Of course, older age groups (also with high correlations in Ireland's case) will see some growth - but they won't be in the market for the over-supply of starter houses that will make up an awful lot of the NAMA portfolio. This, by the way, is also a major challenge for businesses dependent on the Irish consumer market - as I pointed out in a presentation earlier today to the Sales Institute of Ireland.

It took me ten minutes with CSO and IMF data to work this out using Excel. I hope some of the NAMA advisors who will be paid €2.64 billion over the next ten years will check it out for themselves before they prepare another 'draft' of their plan.
Posted by Gerard O'Neill at Thursday, October 15, 2009