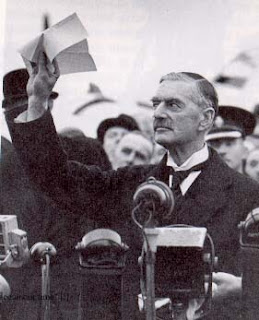 Two thousand years ago, a Roman Senator suggested that all slaves wear white armbands to better identify them. “No”, said a wiser Senator, “If they see how many of them there are, they may revolt.” Anon

Friday 6th November is Get Up Stand Up day, one that will presumably see a great many public sector workers - and some private sector ones - protest at all the things the Government hasn't done yet. It is their right to do so; a right that I would defend.

Tax resistance has a noble tradition, and given the Government's Chamberlain-like negotiating stance with the unions then it might be wise to have a Plan B in mind. IBEC are beginning to wake up to this possibility, as Danny McCoy from IBEC put it last week:

If consensus cannot be reached, business will take its own decision on how best to proceed in the absence of an agreement.

I have a suggestion for IBEC: for every day of (perfectly legitimate) protest by Congress that brings Dublin and our other major cities to a halt (at employers' and businesses' expense), let's have a "Taxpayers Rest Day" - with all IBEC's members deducting 1/20th of their PRSI/PAYE returns for each month in which a protest takes place (assuming 20 working days in the average month). Sending the monies to IBEC instead to support their campaigning.

That should concentrate the minds of everyone at the negotiating table wonderfully: especially the 'Neville Chamberlains' in Government Buildings. Time to hand out the armbands.
Posted by Gerard O'Neill at Sunday, October 25, 2009