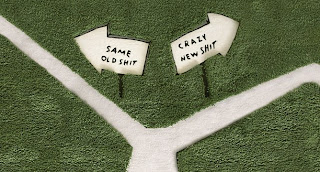 If something can't go on forever, it will stop.
Herb Stein

Any politician campaigning for fewer politicians will get my vote. Like Enda Kenny. Not only does he want 20 fewer TDs he also wants to get rid of the Seanad. We have too much government in Ireland and Kenny's proposals are a welcome start (as are the Green's demands for an Independent Electoral Commission).

Rationally rethinking the ways in which we govern ourselves (as opposed to the cute hoorey of decentralisation) makes a lot of sense. Never waste a crisis and all that. But we need to go much, much further.

Take the conditions of employment in the public sector. It is the last hold out of the 'jobs for life' mentality. I think everyone in employment - public or private sector - should be on a fixed term contract (sort of the way politicians are). Say 3-5 years, with options for shorter, 1-2 year contracts. This would have several major advantages. Firstly, as the largest employer, the public sector would have the option not to renew contracts if tax revenues meant it could not be afforded. Ideally the renew/don't renew decision would be devolved to management levels best able to make the decisions. The managers would also be on fixed term contracts, of course. This would free up the state to engage in more significant reorganisation of service provisions without the ludicrous situation we have in the likes of the HSE where a host of regional health authorities were 'replaced' by one central authority without a single manager being let go.

I would advocate the same arrangement for the private sector - in fact, ideally it should be made illegal to offer anyone a 'permanent' contract in either the public or private sectors. And I wouldn't stop at employment contracts. I would also like to see commercial rental agreements subject to considerably shorter timeframes (the current practice of 20 years and more leases is frankly Victorian in its assumptions and precedents).

What consequences might we expect? Less borrowing and more savings perhaps? Hardly a bad thing in itself. More people would take out income and mortgage protection policies in order to access longer term loans. But the facilities for this are already in place and widely available. Think of it as a form of 'flexicurity' along the lines advocated by many on the Left (and by NESC). Though they never seem to extend the same labour market flexibility to the public sector for some reason. Flexicurity applied to the public sector as well as the private sector (combining fixed term contracts with income insurance, retraining etc) would improve productivity as well as reduce the rate of increase in public sector costs. Nor would it necessarily mean fewer public sector employees - an expanding economy and population fuelled by a more efficient state might actually require more employees.

Such an approach to employment in the public sector would also help us avoid the situation we are in now: borrowing €400 million a week primarily to meet the contractual obligation of jobs for life in the public sector. It doesn't have to be this way. A more flexible approach to public sector employment across the board would avoid the kind of show down we are about to experience in Ireland in the coming months, with Irish public sector unions playing chicken with the IMF. A more flexible approach could also imply higher wages and salaries for certain, skilled public sector workers to tempt them from (or prevent them defecting to) the private sector. I for one wouldn't have a problem with that if it meant better value for money and higher public sector productivity. Hell, it might even be worth paying higher taxes for it, but don't tell anyone I said that ...

One last thing inspired by Tim Harford. What if the IMF do come knocking? What if schools and hospitals are closed by cut backs and strike action? Could the 6 out of 7 of us not working in the public sector carry on without them? Here's his radical rethink on health services:

There is an obvious alternative. We could pay for our medical treatment the same way that we pay for our cars or our food or a roof over our heads: out of our own pockets. Before rejecting the idea out of hand, at least acknowledge that it would encourage us to ask a very different set of questions, including: “is there a cheaper way that would work?”, “can I get better value treatment elsewhere?”, and even “would I save money if I drank less and exercised more?” The effect on cost and quality would be bracing.

Think about medical technology. Why does its price keep rising while the price of other technology keeps falling? Perhaps it is just bad luck, but I doubt it. As long as patients have no way to demand better value instead of simply better quality, cost inflation seems inescapable.

He's right of course. If - instead of paying taxes to politicians to pay to managers to negotiate with the unions to provide the services - we just went out and bought what we wanted then we'd all begin to wonder where it might stop. Thinking the unthinkable - I wonder does Enda realise what he's started?