A Triumph of Bureaucracy 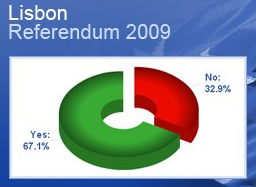 "Everything must change so that everything can stay the same."
The Leopard

I never quite understood the emotion invested by both the No side and the Yes side in the first and second Lisbon Referendums. The Lisbon Treaty itself struck me as a turgidly dull manual for making modest changes to the operation of the European Union with a view to modest improvements in efficiency. A triumph of bureaucracy necessary in a Union comprising 27 countries and half a billion people. Nothing to get excited about.

But I do agree with The Free Marketeer on one thing:

We will forgive the European Union this time for pushing a bunch of reforms through national parliaments without persuading most citizens of the benefits. But never again. Ireland’s referenda have been pretty reflective of the European meme: We’re not saying ‘Yes’ until somebody really tells us what we’re saying ‘Yes’ to, and why.

Where the EU once had a plan with widespread democratic consent (a Single Market and, to a lesser degree, a Single Currency); it now seems mostly to be about bureaucratic change. And the problem with a focus on administrative plumbing is that we end up like Prince Fabrizio in Giuseppe di Lampedusa's magnificent novel The Leopard (and an equally magnificent movie directed by Luchino Visconti). We end up with a Union trying to hold back the tide of the future by modest accomodations with change.

A strategy that did not end well for the aristocracy of Sicily.
Posted by Gerard O'Neill at Sunday, October 04, 2009