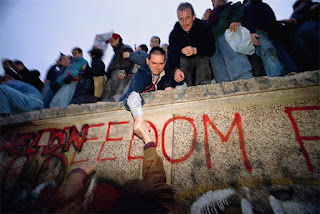 Today should have been a holiday across Europe, one celebrating freedom. What happened twenty years ago in Berlin was truly extraordinary: people power writ large - ordinary people writing history.

But it isn't a holiday, perhaps because we take our freedom too much for granted in Ireland; in Europe too, for that matter. And we take the material comfort and life choices provided by free market democracy too much for granted as well. Writing about the 20th anniversary of the fall of the Berlin Wall, Roger Scruton is less optimistic than he was back then:

I, in my naivety, believed that a whole society could come to see the folly of the socialist idea, and by jettisoning a project that inevitably led to the expansion of the state and the destruction of civil society, would put liberty instead of equality at the top of its political agenda. It was not to be. As my colleagues illustrated, the socialist idea, once in place, is immovable. Of course, it will change its name and moderate its methods according to the spirit of the times. But in the modern world, there will always be a section of society—not necessarily the majority, but the one with which the intellectuals identify, and upon whose inertia they rely—that puts equality first and regards liberty as a dubious asset benefiting only the few. Within a few years, I had picked up my pessimistic shield again; I no longer believed that people would try to rescue civil society from the state, or that they would see law, institutions, and national culture as the foundations of a free and prosperous social order. The same spirit of resentment that had animated the Communist Party, both as a revolutionary movement and as a dictatorial power, had returned in softer forms. People voted for equality, so as to help themselves to assets and powers that they could not obtain through merely honest means.

And it isn't just the economic crisis that has damaged people's support for free market democracy. A recent survey by Pew Research shows a worrying decline in support for the free market economy among central and eastern Europeans: 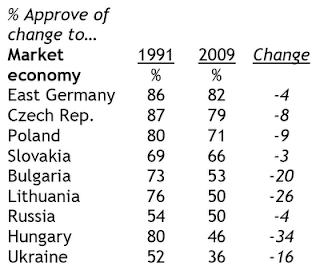 How could this happen? One word: corruption . Asked what are the top problems facing 'our country' (other than the economy), corruption dominates the list in almost all the countries surveyed. It is a pertinent reminder of what happens when free market capitalism is hijacked by crony capitalism.

I am going to argue that there are three elements to the triumph of the market economy. The first I will describe under the heading of ‘prices as signals’: the price mechanism is generally a better guide to resource allocation than central planning. The second element is ‘markets as a process of discovery’: a chaotic process of experimentation is the means through which a market economy adapts to change. The third heading is ‘diffusion of political and economic power’. The economic point here is that prosperity and growth require that entrepreneurial energy should be focussed on the creation of wealth, rather than the appropriation of the wealth of other people.

In what we teach, in what we say, in our economic research and most importantly in the policies we adopt – we put too much emphasis on the first of these elements – prices as signals to guide resource allocation – at the expense of the, possibly more important, second and third elements – markets as process of discovery, markets as mechanism for the diffusion of political and economic power.

Kay is absolutely right: too many governments - in the East as well as in the West - have adopted pro-business policies in response to the crisis that simply propped up market incumbents to the detriment of potential new entrants (and to the detriment of buyers in the affected markets). And we're still doing it: just look at NAMA (which bizarrely entails the State buying €28 billion worth of dodgy assets from Anglo Irish Bank - which is already owned by the State). No wonder the people of Europe are less enamoured with the free market than they were twenty years ago.

What about the next twenty years? History did not stop in 1989, nor does it look likely to any time soon. One key challenge will be to ensure we do not lose all we have gained since the fall of the Berlin Wall. The disgraceful interference of the European Court of Human Rights in Italian cultural practices and preferences - demanding the removal of all crucifixes from Italian schools - is one illustration of how quickly freedom can be eroded. The price of liberty is eternal vigilance, as Henry Porter has noted:

Twenty years later, a European institution is busily enforcing secularism on the grounds that some kid belonging to a busybody Finnish-born atheist in northern Italy might have been momentarily put off his or her lessons, which I seriously doubt. It is enough to make you a Eurosceptic, but there again, Euroscepticism seems to me to be the only responsible stance of an intelligent democrat now that the Lisbon treaty is finally ratified. Scepticism is not reflex hostility, but, rather, alertness that assesses each new office, every new shadowy committee or opaque directive and asks: "Is this right for our society?"

The sceptic does not follow dreams or "lightly surrender a known good for unknown better". That phrase comes from the Conservative philosopher Michael Oakeshott, but I stress that scepticism is not being a little England Tory or any of the other nonsense spouted by French Euro-enthusiasts last week; it is sounding a note of caution, reserving judgement and not being carried away by ideas and political structures which may not be in the interests of the common good.

We must never take our freedom for granted, nor forget the unique powers of free market democracy to meet the needs of human beings; both of this and of future generations. I'll leave the final word to John Kay:

The world is uncertain: not just risky, but uncertain, in the sense used by Keynes and Knight. Not only do we not know which future outcomes will happen: we are unable to specify at all fully what these possible outcomes will be. If we could predict or anticipate the invention of the wheel, we would have already invented it. Market economies do not predict the future, they explore it. That is a fundamental – perhaps the fundamental – difference between a planned and a market economy.