If You're Gay, Black, Disabled Come Into the Parlour ... 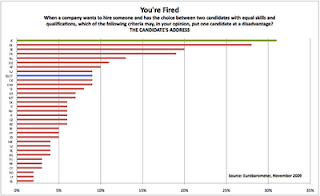 ... but not if you're from Moyross or Darndale. We Irish are a tolerant lot it seems: we can tolerate everyone except our neighbours. That's my read of the latest Eurobarometer report on Discrimination in the EU in 2009.

Only one in ten Irish people have experienced discrimination in the past year, or if you prefer, 9 in 10 haven't. That's discrimination based on gender, age, disability, ethnicity, sexual orientation or religion.

But the discrimination that dare not speak its name - at least within the 228 pages of the Eurobarometer report - is class discrimination. Though we do get an inkling in the above chart that I've created from the findings. Asked on what grounds an equally qualified candidate might not get a job compared to another, 31% of Irish respondents chose 'the candidate's address' as a factor: easily the highest in the EU. In fact, having the wrong 'accent' in Ireland is more likely to see you on the wrong side of a job offer than being black (36% vs. 33%). Maybe it's a small country thing (the Danes and Swedish are even more obsessed about a candidate's accent than any other European nation, whatever that's about).

Of course 'address' and 'accent' are simply code words for social class. Strangely though it's a form of discrimination that is never addressed directly by the Discrimination Industry (in Ireland or the EU). Perhaps it's a demarcation thing with the Poverty Industry? But fear not, the introduction of Post Codes in the Republic of Ireland in 2011 will change all that. Mind you, I remember the furore back in the 1980s when An Post had the temerity to propose splitting the Dublin 6 postal district into two more easily managed Dublin 6/Dublin 26 districts. Dublin 26 sounds alarmingly close to all those Dublin 22s and 24s on the wrong side of the M50. The compromise was Dublin 6W, and so the property prices of Terenure were preserved ...

I'm not holding my breath for 'all the children of the nation' to be 'cherished equally' by postal district just yet.
Posted by Gerard O'Neill at Tuesday, November 10, 2009