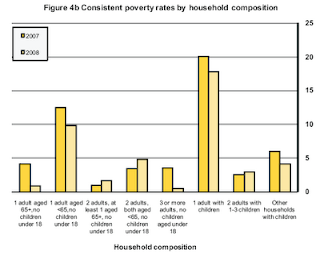 Responding to yesterday's SILC 2008 report from the CSO, Fr Seán Healy was moved to observe that, without social welfare payments, 43 per cent of our population would be in poverty. Indeed. And if everyone stopped eating 100% of the population would die of starvation. I'm sure there's a point there somewhere ...

I think we all get the importance of social welfare payments to the wellbeing of recipients. In fact, we have been so generous with our social welfare payments in Ireland that the incidence of 'poverty' (using the elastic definition of 60% of median incomes) has fallen massively and consistently since 2005. Moreover, the standard measure of inequality - the GINI coefficient - has also fallen: to the point where Ireland is 'equal' with the average EU level. So less poverty and more equality.

Something to celebrate surely? Not if you're Social Justice Ireland (a better name, I admit, than 'Continuity CORI' now that the latter is synonymous with sweetheart deals costing the taxpayer hundreds of millions of euro in abuse compensation). Fr Healy's worried that the much touted cuts in social welfare payments in the forthcoming budget might lead to an increase in poverty. But he needn't worry. Those who insist on the ludicrous definition of 'poverty risk' as equal to 60% of median incomes are about to see poverty levels plunge as median incomes fall: leaving those on even modestly reduced social welfare payments comparatively 'well off'.

We've had deepening deflation since the start of this year, coupled with falling nominal wages and salaries for many. So don't be surprised to see less 'poverty', a lot more equality and an even narrower income differential between the employed and unemployed (and also between the employed and the retired: a ratio of 77% in the case of the latter in 2008).

Nevertheless this is bad news for the Poverty Industry. Their problem is that we have been spectacularly successful at eradicating a great deal of poverty in Ireland thanks to the blessing of economic growth in the past ten years. Those traditionally most vulnerable to poverty - the elderly - have effectively been freed from poverty, as the chart above shows (from the same SILC report). This is something we should be justifiably proud of in Ireland. But the remaining problem isn't one that can simply be fixed with higher social welfare payments (real or nominal). We've taken that as far as it will go (and probably a lot further in the case of some recipients).

There is, though, one group that remains especially vulnerable to poverty - and it's rather obvious from the chart. Now you might think that this would lead to loud and persistent calls from likes of Social Justice Ireland/CORI to do something about the problems arising from the incidence of lone parent families in Ireland. On every measure presented in the SILC report - disposable incomes, relative poverty, deprivation etc - households comprising one adult with children consistently and persistently score highest on all the wrong indicators. So whom does SJI/CORI fret about? That's right, the working poor and people living in the Midlands. Go figure.

The Poverty Industry simply prefers to ignore the blindingly obvious for the politically correct. Hence the likes of NESC fretting more about the impact of pets on children's welfare than lone parenthood. Like I said, this isn't social policy so much as phrenology. Luckily such fashions come and go and eventually (though probably not soon) we'll get serious about eradicating childhood poverty (now much more prevalent than poverty in old age).

The United States is ahead of us in this regard. A recent study from Brookings on Creating An Opportunity Society has examined the drivers of upward social mobility around the world. The authors conclude that the transition to the middle class is all but guaranteed for poor children in the United States if they do three things: finish high school, work full time and marry before having children. Reviewing their book, Clive Crook in the Financial Times observes:

Sadly I can't see any of our poverty advocates in Ireland (not even those belonging to the Catholic Church, God help us) going there just yet. Not even challenging the insane plans to extend the same legal protections afford to married couples to cohabiting couples, creating even more instability for children in families.

Perhaps they will after they've sorted out the Midlands. Pity the children.
Posted by Gerard O'Neill at Friday, November 20, 2009