In Denial About Alarmism 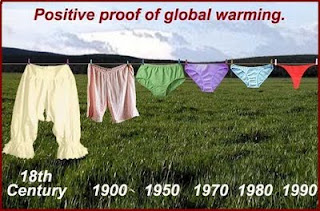 One good thing that should come out of the Climategate scandal is a more sober, more open-minded discussion about the causes, consequences and 'cure' for climate change. Though there'll probably be a little more gloating by those traditionally labelled as 'denialists' for a while yet.

But once they've done gloating the task in hand will remain the same: filtering out actual trends in climate from the chaotic and noisy background of weather. Possibly one example of this new rapproachment is The Global Warming Policy Foundation, launched recently. Nigel Lawson is one of the founding figures, and he has been regularly labelled a denialist by those leaning more towards the alarmist wing of the climate debate.

But he is joined by an impressive academic advisory council - including our own Richard Tol. Richard is firmly in the camp of those who worry adverse climate change is happening and will worsen. But he is decidedly against the more alarmist responses proposed by some. As he notes in a recent VoxEU contribution:

So a proportionate response to a highly uncertain threat is that of a carbon tax - something he has consistently supported. It is important to adopt policies that are themselves adaptive - with some potential for reversal if they prove unnecessary or to have unforeseen and negative consequences. Human society is also adaptable, as Francisco Capella has noted in a more philosophical piece on climate policy:

There is no optimal climate, and conflicts for the climate's determination may arise if humans achieve partial control over it. Even if humans are adapted to the present climate, this does not imply that it would be difficult to adapt to different climates if the changes are not excessive.

... For almost all human problems associated with global warming, the influence of climate on them is usually small if compared with other more important factors that can be more easily and efficiently dealt with. Climate change alarmists seem to ignore relatively simple solutions for the problems they raise. Humans are proactive, they do not passively submit to natural influences, and the avoidance of climate change is not necessarily the best option.

Climate change, like the weather, has always been with us - and always will be. To the extent we better understand our role as a species in influencing change then the better we can respond to it - including mitigating strategies. A more open, more modest approach by those like the East Anglia CRU, who allowed their politics to get in the way of their science, will also help.
Posted by Gerard O'Neill at Wednesday, November 25, 2009