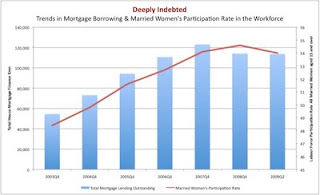 Is negative equity the ultimate legacy of feminism? A movement that began in Ireland as elsewhere desiring that women should be free to participate fully in society ended up fetishising paid employment over all other choices. And one consequence of this fetish has been the explosion of household debt now gripping hundreds of thousands of Irish families.

I've charted the trend in total mortgage lending outstanding (from Central Bank data) against the participation rate of all married women (from the CSO). One consequence of the unprecedented and rapid increase in married women's participation in the workforce (passing the 50% mark in early 2005) was the ability of households to borrow money. Instead of borrowing against one income they could now borrow against two. And the banks, God bless 'em, were only too eager to lend. Way too eager as we all realise in hindsight.

This rapid increase in women's participation in Ireland's workforce is addressed in yet another Equality Authority report on the plight of Irish women - A Woman's Place: Female Participation in the Irish Labour Market. Oddly enough, nowhere in its 102 pages does debt, borrowing or mortgages get mentioned. Instead we are treated to the usual bromides about pay gaps and unequal household divisions of work. All of which are, if you read the text carefully rather than the press coverage, almost entirely explainable in terms of the choices women - working or otherwise - have made for themselves (and with which the vast majority of women are happy).

You might think then that the authors would propose leaving well enough alone. But of course not: what would the Equality Authority be left doing if that was the case? So instead we get the usual political shopping list of better pre-school provisions, more flexible employers and less selfish husbands (or partners as we say nowadays). They want to increase the participation rate of women in the workforce not because it's what women want (it's simply assumed) but "for Ireland to achieve and maintain the targets set for female employment within the EU" (last line of concluding text). Whose 'target'?

The small matter of the economic depression now gripping the country is acknowledged by the authors. But not the debt binge that preceded it. They wonder if rising female unemployment might lead to a regression in female participation as women give up hope of getting work. But they shouldn't worry: the legacy of family indebtedness left behind by fetishing paid employment over all other choices a woman might make will ensure that hundreds of thousands of women will have no choice but to keep on working. Slaves to debt, and slaves to the consequences of a flawed ideology.