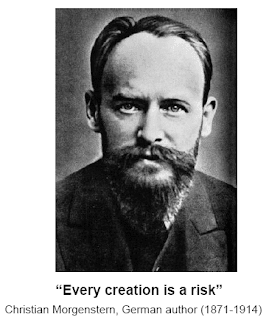 Setting targets for creativity is a bit like setting a target for how much you're going to enjoy the weekend. You can come up with a number - but usually you 'know' creativity (and a good weekend) when you see it, whatever the 'score'.

But if you are going to commit taxpayers' money to an innovation policy then I guess some kind of targets are necessary - such as those set out in the recent Forfas report on Skills in Creativity, Design and Innovation. It's actually a good primer on current thinking about innovation, creativity etc, and the suggested targets are fair enough as far as they go.

But we need to go further: the real issue at the heart of creativity and innovation is the issue of risk. Doing nothing is often safer than doing something - in the private sector as well as the public sector. Right now Ireland is reverting to a more traditional 'risk averse' mode of thinking and doing. And who can blame us? Ireland is a country that imprisons people for not paying their TV licence; as well as having an exceptionally high level of personal guarantees demanded by banks from their business borrowers. Is it any wonder that demand for business loans has fallen off a cliff in Ireland even as it picks up elsewhere?

We are not alone our new found risk aversion - but that doesn't mean we are safe. A recent report from Deutsche Bank (Your Country Needs Innovative Minds!) laments how Germany is falling behind many other countries in terms of its investment in innovation and creativity (whence the quote above). Though it would be nice to have their 'problems'. The report also warns against being too specific about targets relating to innovation (including things like the spending on R&D as a percentage of GDP). Fetishising numbers is a highly uncreative thing to do. Moreover, fetishising 'Innovation Island' type targets is no guarantee of economic success - just take a look at Finland.

Still, even if setting measurable targets for creativity is a challenge, measuring it's impact is perhaps more straightforward. Take the work of IDEO, explored in a fascinating article in Wired:

Another example is the work IDEO did for Bank of America. Asked to help attract new customers from a specific target market - middle-aged women with children - the firm, along with a team from the bank, conducted interviews with potential customers across the US. They observed that some of them rounded up their bill payments for speed and ease of mental arithmetic: if an electricity bill came in at $42.23, they found that many would pay, for example, $45, knowing the difference would go towards the next bill. It meant household accounts were simplified, and also that the customer's psychological relationship with the utility company was subtly changed. Other potential customers they met had difficulty saving. These insights led the IDEO team to develop not an advertising campaign nor a set of branding guidelines, but instead a whole new bank account: one in which any money spent on the accompanying debit card is rounded up to the nearest dollar, and the difference automatically placed into a separate savings account.

Since its launch in 2005, the Keep The Change account, based on observation and developed through design thinking, has brought Bank of America up to ten million new customers, and has resulted in $1.8 billion of savings.

It seems the Icelandic government is now using IDEO to help innovate their way out of their present difficulties. I think we can be similarly innovative and creative in Ireland - but we should create a better environment for risk taking (of the non-economy wrecking kind), than setting spurious targets. And it'll be more fun as well.