No Future for Trade Unions? 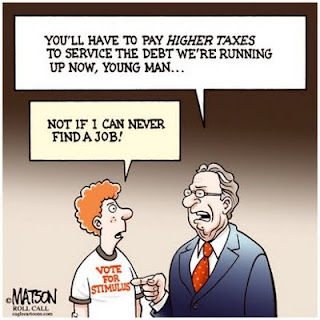 This pattern of a unionised public sector and a non-unionised private sector now seems fairly well established in most developed countries, with trade union density overall declining sharply outside of Scandinavia. As it happens, Irish trade unions have not represented a majority of Irish workers since the mid-1990s. Now as few as 3 in 10 workers in Ireland are union members.

You can look at this in two ways: either trade union membership is increasingly ghettoized among public sector workers; or, the trade union movement has been captured by public sector workers. Or maybe both. Ireland's prolonged dalliance with Catholic Corporatism aka Social Partnership has undoubtedly exacerbated these trends. Not least because one party to the partnership - the Government - also happens to have the largest, most unionised workforce in the country.

It is hard to be optimistic about the future of trade unions in their current form. They are failing to connect with younger employees (and not just in Ireland as noted by Michael Skapinker), a situation that can only get worse due to the shocking rise in youth unemployment and the prospect of fewer new labour force entrants (and hence fewer new union members).

The hospital pass by the banks to the Irish government (and Irish taxpayers) can only mean a decade or more of severe constraints on the capacity for the public sector to expand. Therefore the main source of trade union membership looks set to stagnate if not contract.

Where does that leave trade unions in Ireland? An increasingly flexible, more mobile workforce will simply not see the point of trade unions. But workers will still have critical needs in relation to protection, information and securing their future. In that scenario, trade unions might be better advised to return to their roots and become organisations dedicated to the long term welfare of their members - friendly societies if you like.

And with impoverished governments unable to employ people directly to provide the education, health and social services our ageing society will need then we might all be glad to join the union.