Not Ready for Take-Off 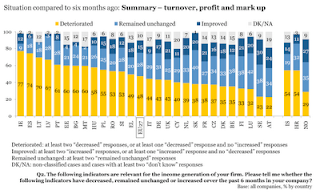 An old friend of mine once served on the aircraft carrier HMS Ark Royal. Any time I was going to catch a plane he would 'helpfully' remind me that "take-off is far more dangerous than landing". Something to do with heavy airplanes full of fuel, fixed length runways, the laws of physics - that sort of thing. He'd obviously seen more than a few ditch in the sea in his time. For some reason I always think of him when I'm on a plane taxying to take-off ...

But I thought of his observation in a different light recently. You might remember all the talk before the recession about a 'soft landing' versus a 'hard landing'. Instead we got a crash landing. Could recovery be subject to some of the same 'aeronautical challenges'? A 'smooth take-off' versus a 'stalled take-off', for example?

Bear with my analogy a little longer. Take the Central Bank's latest credit data showing that lending to every single sector of the economy (except for the financial sector) was down substantially in September on the year before. Think of credit as kerosene for the jet engines: we're low on fuel.

Then there's the recent pan-EU Enterprise Finance Index, which reported on the availability of finance for Europe's businesses and their commercial performance at present. As you can see from the chart, Ireland scored worse than any other EU country in terms of turnover, profitability or pricing power. Think of this as red warning lights flashing on the pilot control panel.

So as Ireland Inc taxis to the runway a few more things strike us. We're carrying too much excess baggage relative to our engine size in the form of commercial and personal debt. What's more, the aircraft's tyres are nearly flat thanks to weak domestic spending and rising taxes. But we need to take-off anyway and so we keep going, desperately trying to build up velocity as we head down the runway, seat belts on.

But what's that? The European Central Bank is planning to raise interest rates. So the runway is getting shorter, and the excess baggage heavier.