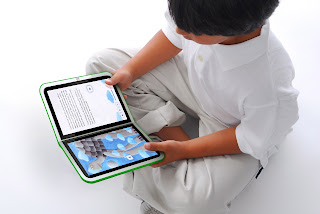 The Government's Smart Schools initiative is a missed opportunity. That's a pity. Yes it's good to see schools finally catching up with late 20th century technologies (laptops and overhead projectors): but what about leapfrogging to the 21st century and giving every child an ebook?

I've blogged about this before, and I'm not the only one thinking this way - so is Arnie. The idea has been around a while. Indeed, some Irish schools are experimenting with this - including several in South County Dublin. So I was staggered to find that the Department of Education's/ICT Ireland's Smart Schools = Smart Economy report doesn't contain a single reference to ebooks. Not even one. Surely the smarter thing to do would be to align ourselves with the next generation of pedagogic technologies and to enable a cluster of supporting Irish businesses to grow up around them? Laptops and projectors won't do it.

Of course there's the cost issue. The Government's €150 million spend over the next three years will equate to just €179 per child in first and second levels combined (498,914 in the former, and 341,312 in the latter according to the Department's statistics). On the other hand, giving every child the latest Amazon Kindle (or equivalent) would currently cost $259 - that's about €173 at today's exchange rate. I'd imagine the Department might even get that price down a bit if they were to order, say, 900,000 (just to have a few spare) ...

Moreover, we then have to factor in the savings: parents spend a fortune on school books every year (an average of €100 per primary child and a great deal more per secondary child according to Barnardos). By my rough reckoning, if we assume €100 per year per first level child and €150 per year per second level child then that's €101 million spent on books EVERY YEAR.

We can be certain that the prices of ebooks will fall rapidly as sales take off. I believe we need to adopt a smarter schools strategy than the one proposed (incorporating key elements of the current strategy). And as a parent a smarter strategy would certainly get my vote (and taxes).
Posted by Gerard O'Neill at Wednesday, November 18, 2009