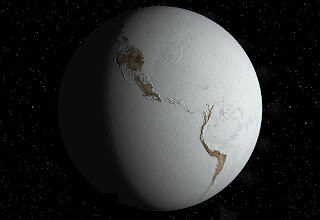 They're calling it 'snowmaggedon' in America's North East as a record breaking snow storm brings Christmas shopping to a halt (and everything else besides). The big chill temporarily gripping Northern Europe and North America is perhaps a fitting end to all the hot air we witnessed in Copenhagen.

Weather isn't climate of course, and even in Ireland winter tends to be that bit cooler than summer (though it can be hard to tell sometimes ...) But No Hopenhagen is better than Hopenhagen if we are spared the worst of both worlds: Europeans bearing the costs of self-inflicted eco-rectitude whilst the rest of the world keeps on going its merry, carbon-emitting way. Though it's probably too late for the 1,700 steel workers being made redundant in the UK, for which their employers - Corus - will be 'rewarded' with nearly £0.25 billion in carbon credits.

The farce in Copenhagen nevertheless appears to have succeeded in annoying everybody - unity of sorts I guess. Stewart Brand reminds us that there are four sides to the climate story, and I suspect that none of them are all that happy with what appears to be nothing more than a decision to make a decision later.

Richard Tol has a world-weary take on it all:

One could hope that the failure in Copenhagen will lead to a fundamental re-think of international climate policy. I’ve hoped that for over 15 years now, and I’m not holding my breath this time.