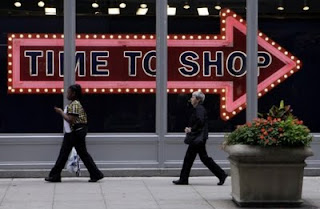 Yesterday's Budget was very, very clever. For weeks now I've been listening to consumers in focus groups and looking at survey results all of which pointed to fearful anticipation of Budget 2010. Now it has come to pass and guess what? ... it wasn't as bad as many (in the private sector, where four out of five work) had feared.

Consumer confidence will be boosted by this budget, and consumer confidence drives consumers spending in the short run. There are other consumer spending stimulants:
The carbon tax still leaves fuel prices well below their levels a year ago, so there will be little real impact there. And of course the reductions in public sector pay and social welfare payments will have a deflationary effect - though most if not all of this will be offset by falling savings ratios as people feel the worst is over and they start to loosen their purse and wallet strings. Nevertheless the Government does forecast a further contraction in consumer spending next year. That said, my faith in government forecasts is on the agnostic side I must confess (I like the recent idea from the UK for an independent Office for Fiscal Analysis to separately prepare the economic outlook for their government's budget).

But the recession isn't over yet. Unemployment and business failures are 'lagging indicators' of the state of the economy: so I expect both to worsen even as other indicators (including consumer confidence) start to improve. I expect to see a peak in business failures (especially retail) and unemployment in Q1 (possibly a sharp one); some levelling off in Q2; with the potential for real economic growth setting in in the second half of the year (including consumer spending).

Remember, most consumers don't have debts, and most employees (87%+) will keep their jobs. There is a lot of pent up replacement demand out there (cars especially), and deflation means a lot more bargains to tempt those with money to spend. Indeed, recovery might come sooner if exports improve more quickly on the back of an international recovery now underway; and employers move quickly back into hiring mode. After yesterday I think there's a 60-70% chance Brian Lenihan's bullish prognosis that the worst is over and recovery will gain traction next year is right.

The odds on a June 2010 General Election have just gotten shorter.
Posted by Gerard O'Neill at Thursday, December 10, 2009