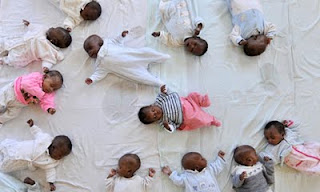 Marx wasn't a Marxist and Christ wasn't a Christian. And now it seems Malthus wasn't a Malthusian. Or so says Adam Martin in a guest blog on Aidwatch who notes that Malthus never assumed that people would keep on having babies regardless of the consequences (namely: mass starvation). Instead Malthus observed that:

"Impelled to the increase of his species by an equally powerful instinct, reason interrupts his career, and asks him whether he may not bring beings into the world, for whom he cannot provide the means of subsistence."

But let's not forget the economists. As Martin reminds us, the laws of economics are more powerful than the laws of physics:

I once saw Deirdre McCloskey illustrate this by placing a $100 bill on the table. The laws of physics, she reminded the class, dictate that an object at rest tends to stay at rest. Economics tells us that errant $100 bills laying out in the open do not remain unattended for long. She assured the students that, were she to leave the room for several hours, economics would better predict Mr. Franklin’s fate.

Indeed: and it seems that the biggest influence on population growth is affluence - women in more affluent societies tend to have fewer children, as noted by Andrew Jack in the Financial Times recently. However some observers fear that this process in now going into reverse:

Using data from 1975, he and his colleagues confirmed a classic straight-line inverse correlation between wealth and fertility in dozens of countries. A fall in total fertility rates – the theoretical number of births in a woman’s reproductive lifetime – coincides with a rising score on the UN’s human development index, a measure of standard of living, education and life expectancy.

But replotting to include data from 2005, they spotted a striking number of exceptions among richer countries that had exceeded the very high score of 0.9 on the index, suggesting instead a rotated “J” curve – the start of a rise after a steady drop. The US, the UK, Denmark, the Netherlands, Norway and Germany were among those showing a recent rise in fertility.

It's too early to tell perhaps. But now there are other worries: instead of worrying about Malthusian starvation we now have to worry about Malthusian climate change. Hence a new initiative by the Optimum Population Trust (OPT) which has launched PopOffsets whereby you can offset your carbon footprint by, er, funding the distribution of condoms and the like. It might sound dodgy but here's their reasoning:

The cost-benefit analysis commissioned by the trust claims that family planning is the cheapest way to reduce carbon emissions. Every £4 spent on contraception, it says, saves one tonne of CO2 being added to global warming, but a similar reduction in emissions would require an £8 investment in tree planting, £15 in wind power, £31 in solar energy and £56 in hybrid vehicle technology.

Fewer people = fewer emissions. Fewer poor people in poor countries that is. I'm uncomfortable with all this for some reason. So is Frank Ferudi, who observes about the OPT initiative that:

Once newborn babies are dehumanised and recast as little pollution machines it becomes possible to advocate their elimination as an exercise in the reduction of carbon emissions. A world that can place an equal sign between a baby and carbon is one that has lost its faith in humanity.

... The OPT’s trade-off between birth control and energy-saving technology – where a simple condom is said to be a better investment for ‘saving the planet’ than hi-tech inventions – is testimony to today’s disturbing mood of estrangement from human life. It is not surprising that offsetting carbon emissions through funding birth control is preferred to technological innovation. Because where technological innovation relies on investing in human potential, Malthusianism is focused on preventing the realisation of human potential.

What matters is that, when discussing population, we do not forget the basic lessons of economics. A top-down perspective on population that treats treats individuals like mindless lemmings will panic: “Unless we reduce the human population humanely through family planning, nature will do it for us through violence, epidemics or starvation.”

Malthus gets right what both his followers and his more technocratic critics get wrong: the institutions within which individuals make reproductive decisions matter. The way to increase GDP per capita is not to cut the denominator. And while today’s scare tactics (Mali is “really in for a Malthusian disaster,”) and recommendations to stop having babies are not as monstrous as those of yesteryear, we should be wary of those who would intrude on one of the most personal and sacred choices individuals confront – whether to have a child. Nor is population sustainability a mere horse race between libido and technology. Consistent with the approach of classical economists, Malthus treats human nature as constant. Different institutions drive differences in fertility outcomes. In this we should all be Malthusians.

He's right of course. It is economics working with technological innovation that creates a virtuous circle of affluence and abundance that solves the problems that might otherwise engulf us. The same goes for climate change. The government's decision to contribute €100 million to the EU's climate change aid programme is a ridiculous variation on the Population Offsets theme. Instead they and we would be better off announcing 10 x €10 million Carbon Prizes for technological innovations that tackle the causes and consequences of climate change. On the condition that the intellectual property attaching to any prize winning innovations is shared freely with the rest of the world.

We are a young species, only at the start of our story here on Earth. And it won't be confined to Earth. Surfdaddy Orca paints an inspiring picture of the future consequences from the fusion of nano, bio, info, cogno (NBIC) technologies in the latest delightful issue of h+ magazine (h for human that is). One forecast for 2050:

The vast promise of outer space will finally be realized by means of efficient launch vehicles, robotic construction of extraterrestrial bases, and profitable exploitation of the resources of the Moon, Mars, or near-Earth asteroids.

The result of an affluence+innovation wave fuelled by economics. So economics will take us to space: and in that regard, economists are the true astronauts. Live long and prosper ...