Family Failure is the Health of the State 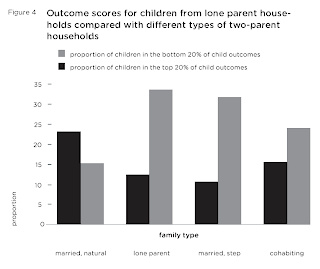 We Irish don't invade countries, a fact I'm rather proud of. For some other nations war is the health of the state. But not for Ireland. Nor for most European countries these days. So if it isn't wars and armies and the permanent threat of 'the other' that justifies a stronger state, what does? The answer is obvious: family failure.

The chart is from the recent Demos report on Building Character which argues that 'style of parenting' - and the impact it has on children's characters - trumps everything else in determining the lifetime success of children. More important, apparently, than how many parents you live with, or even if they are your biological parents. The chart would suggest that actually these things do matter, but are dismissed by the authors with the observation that:

Sort of seems obvious really; two parents potentially means two incomes which is, er, twice as many as one parent. But apparently not:

However, when we control for other characteristics – namely parental style and parental confidence – the relationship between family structure and child outcomes disappears almost entirely. The only remaining correlation is a small difference between married parents and cohabiting parents (probably because marriage is serving as a proxy for more stable and happy partnerships). Crucially, the outcomes for children of lone parents and step-parents are explained by the differences in other family characteristics such as parental confidence and self esteem; being a lone parent or a step-parent does not adversely affect child outcomes in itself.

Which sort of sounds like it's the parents fault don't you think? Indeed, Demos approvingly quotes Professor Stephen Scott as observing that:

Poverty is a factor, but not a central one… I am fond of saying poverty of what? And actually it seems to be poverty of the parent-child experience… that leads to poor child outcomes rather than poverty of a material kind.

Or as the Demos authors explain:

A rich research literature demonstrates that healthy psychological development requires nurture, affection, intellectual stimulation, security and stability. These vital ingredients of a good start in life can of course be provided within any family form. However, there is some evidence that lone parents and cohabiting couples do less well in terms of child outcomes than married couples.

But the causal factors at work here are not straightforward. An analysis undertaken by Kiernan of the MCS found that family status was only very weakly associated with children’s development, once other factors – like poverty, maternal depression and so on – were controlled for.

Which does rather beg the question whether family status and structure might actually have caused the poverty? Jennie Bristow has a few concerns with this. As she notes:

What is striking about this is not only the blithe assertion that all manner of social inequalities and life problems can be obliterated by parents simply setting a few house rules for their toddlers. It is the reduction of a child’s moral development, the building of character that takes place over the course of childhood within a distinct cultural context, to a particular parenting style that results in clearly observable attributes amongst five-year-olds.

Worse, we are told in the technical appendix to the Demos report that the children's behaviour and development they are supposedly measuring is actually based on the opinions of (mainly) their mothers in the survey. Not on any observed behaviour itself. Seems a rather weak basis to dismiss family structure as a significant influence on children's development.

But what has all this to do with the State? Lately I've been sounding like Mr Maguire in The Graduate whose career advice to Dustin Hoffman is just one word: Plastics. Only my advice to young people contemplating their future career options in Ireland is just two words: Family Law.
My advice is inspired by the less than inspirational Civil Partnership Bill. And I'm not referring to the first part of the Bill dealing with gay couples - which seems to be getting most (or make that all) of the airtime during the current debate.

No, my concern is with Part 15 dealing with Cohabitants from clause 169 onwards. As I've noted before, we are sleepwalking into a legal, social and economic disaster without any consideration or awareness. Though some legal professionals are finally beginning to take notice. The legislation purports to extend some of the same 'certainties' to cohabiting couples currently enjoyed by married couples. Only they are the certainties that go with the couple breaking up, not staying together. The bill means that any young man or woman cohabiting as a heterosexual couple for more than three years (two if they have children) are legally liable to have to share their incomes and wealth with the other partner should he or she decide to split up. Do you see the career opportunity here folks?

The gay partnership issue is something of a diversion (though a serious issue in itself). The reality is that the number of gay couples availing of the legislation will be trivially small. Just look at the experience of Northern Ireland whose Registrar General has just reported that in 2008 only 86 same-sex civil partnerships were registered in Northern Ireland, down from 111 in 2007. As I keep saying, gays are a tiny minority of the population and only a minority of gays will want to marry/form a civil partnership if the experience of other countries with gay marriage is anything to go by.

But I could be wrong: maybe it's the final phase of the gender war and men have finally won? That's according to one tongue-in-cheek explanation anyway.