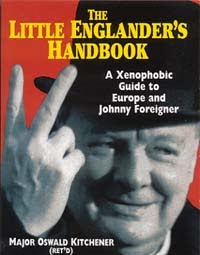 The execution of Akmal Shaikh by the Chinese is another, sad symptom of the United Kingdom's decline. He would not have been executed if he was a citizen of the United States. The Chinese still respect the power that comes out of the barrel of a gun - and America still has the bigger guns (economically as well as militarily). Britain obviously doesn't.

This matters to us in Ireland. Not in the "England's difficulty is Ireland's opportunity" sense of old (when, regrettably, it did make some sense). But rather in terms of the extent to which Ireland's economic prospects are still tied to those of the UK: our largest export market and the only country with which we happen to share a land border.

I've fretted about Britain before, and I'm still fretting. Like most Irish people I have a normal, neighbourly desire to see our cousins across the Irish Sea do well for themselves (bound as we are by the ties of history, trade, demography, culture and legal systems). Growing up a nationalist in Northern Ireland I had a rather different attitude. But I've got over it - as have most I reckon.

However the 'difficulty/opportunity' duality might be taking on another form. Optimistic as it may seem, I expect that Ireland will emerge from most of our present difficulties as 2010 progresses. Unfortunately, I suspect that Britain might well enter a very difficult period at the same time. The UK government has still to respond to the challenges of public sector overspending and massive deficits - nor will it until a Conservative government takes power by the middle of the year. Worse for us, sterling looks set to decline further - even precipitously - against the euro: with some already talking of sterling-euro parity in 2010.

At the heart of the uncertainty about the UK is the dawning realisation that Britain - like Ireland - squandered much of the boom on unsustainable policies and practices. As Max Hastings put it recently, Britain's 'long weekend' is over:

The national mood approaching Christmas 2010 and 2011 is likely to be much bleaker than today’s. Most people will have significantly less money. If the Conservative party wins power, it will fail in its responsibility if it does not cull large numbers of state workers. More businesses will go bust.

There are fundamental uncertainties about how Britain will earn its living for the rest of the 21st century, especially as its earnings from financial services shrinks. Optimists talk up the value of intellectual property and the English language. But how many people can live off the likes of television’s Top Gear programme, the history books of Simon Schama and the novels of Hilary Mantel?

The best British manufacturers are world class, but such bosses as Sir John Rose of Rolls-Royce offer warnings about the shortcomings of the educational system in sustaining a workforce fit to compete with young Singaporeans. Service industries, tourism notable among them, will continue to generate substantial in­come, but scarcely sufficient to fund the Trident nuclear deterrent replacement and other symbols of big power status, to which both the Tories and Labour cherish pretensions.

We are cursed with a bloated sense of self-entitlement, reflected in the excesses of public spending. If we possess a capacity for private contentment that some Americans might envy, the reverse of the medal is a reflexive lassitude.

Some lessons there for Ireland too, no doubt. I do hope that England's forthcoming difficulties do not hamper Ireland's opportunities for growth. Though our destiny will continue to be tied to the larger island next door for the foreseeable future - even if Britain's status in the world continues its inexorable decline.