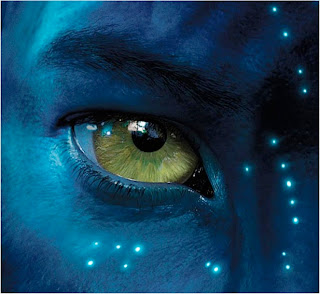 If you haven't seen Avatar yet - but intend to - then you might want to skip this post. I'd certainly recommend it for the 3-D, cinematic experience: all three hours of it!

Still here? Okay, if popular culture is a reflection of a society's values (however attenuated the expression) then what does Avatar say about contemporary American/Western values? To put it mildly I would say they are somewhat 'conflicted'. On the one hand we have a fantasy about a peaceful, indigenous people living in harmony with nature on planet Pandora - until the arrival of greedy humans wielding superior technology. On the other, we have the reality of 'greedy' humans creating the wealth and the technology that enables them to blow $300 million telling a tale about imaginary blue people on another planet ...

The storyline is a riff on Pocahontas/Dances with Wolves with a bit of the Matrix and a few other movie references thrown in for good measure. Which is not to detract from the visual power of the movie itself: it's pretty obvious where the $300 million went when you see it. Nor is there necessarily anything wrong (or even avoidable) about previously used storylines. The best stories are the ones we keep telling one another.

But the story's 'morality' is decidely different to that of, say, Lord of the Rings which was set outside human time, but featured some of the same themes of good vs. evil etc. Avatar, on the other hand, is set in human time: 2154 to be precise. And we are left in no doubt that it is we humans (or the English-speaking, Western variety) that are the baddies. This has already provoked criticisms from some: ranging from those who think it is anti-White to those who think it is pro-Libertarian. Take your pick.

Or maybe not: you could just enjoy the movie for its entertainment value and ignore any 'messages' in the story. As most people will I'm sure. Some how I doubt if anyone will to join the Green Party on the strength of it. The fact is, we Irish have a fairly clear grasp of the distinction between fantasy and reality. Take, for example, the recent Eurobarometer survey. Asked to what extent they agree that 'economic growth must be a priority for my country, even if it affects the environment', more Irish 'agreed totally' than any other Western EU country. In total, 61% of Irish adults agreed - compared with an EU27 average of 47%.

The Irish have never been shy about seeking opportunities elsewhere: so I guess there'll be a few on the first flight to Pandora - or its equivalent - when the time comes.
Posted by Gerard O'Neill at Monday, December 28, 2009

Email ThisBlogThis!Share to TwitterShare to FacebookShare to Pinterest
Labels: Avatar, Dances with Wolves, Eurobarometer, Lord of the Rings, Pocahontas, stories, The Matrix