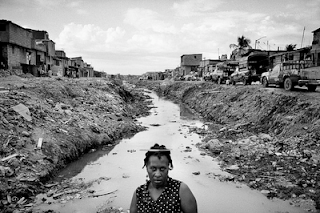 We no longer talk about 'Acts of God' these days, but 'Acts of Gaia' figure more often in the media. Brendan O'Neill (no relation) makes the same point today over at Spiked. We (rightly) take offence at people like Pat Robertson blaming the horrors of the Haitian earthquake on 'pacts with the devil', but take no offence when white men (and their greedy capitalist consumerism) are blamed for the world's natural disasters.

The sheer scale of Haiti's tragedy is not a result of too much capitalism but of too little capitalism. As Anti-Dismal points out - in relation Don Boudreaux's observation that an equivalent magnitude earthquake near San Francisco killed only 63 people back in 1989 - that it's about wealth:

You may argue that stricter building codes are a major reason why the 1989 Bay Area quake killed far fewer people than did this week’s Haiti quake. But stricter building codes increase the cost of building and if you are poor and cannot afford expensive buildings you build cheap, less safe, ones. So you can have all the building codes you like, but people have to be wealthy enough to be able to afford to obey them, for them to work. Also buildings will get safer, even without building codes, as people get wealthier. The more wealth you have the more you have to protect and thus the more you are willing and able to spend on protecting it.

Compared to Haiti we are lucky to have the 'problems' we have here in Ireland. And for a disturbing insight into the problems that that poor, benighted country faced before the earthquake, see The Burden of Aid (whence the image above) via Aid Watch.