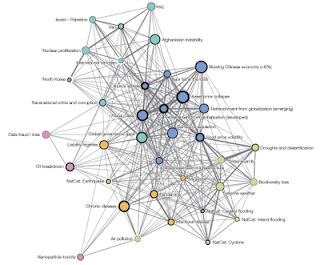 The significance of an event is sometimes only obvious in hindsight, like the assassination of Archduke Franz Ferdinand on 28th June 1914. The story featured the next day on page seven of The Irish Times. Not only did it trigger World War 1 and the death of ten million men over the next four years (including 35,000 Irish men), it marked a high water mark for globalisation. Indeed, it wasn't until the end of the twentieth century that the same level of globalisation was once again attained.

This should remind us that there is nothing inevitable about globalisation. It should also remind us that events regularly refute 'destiny'. The recent spat between China and Google is just such an event. Not the start of a war, but maybe a rehearsal for one. If code is law then hacks are war as one commentator put it. Should Google leave China then it's the same as China 'leaving the world'. In other words, if China continues with its mercantilist economic strategy in combination with aggressive territorial posturing (Taiwan, Tibet for example) then code wars could quickly become cold wars and thence hot wars.

A big 'if' of course. And yet there is nothing in China's behaviour abroad that signals anything other that a 'China First' strategic intent. Maybe it's just the natural order of things - or rather a 250 year long, cyclical fate of empires. Their quarter-of-a-millenium-long 'day in the sun' is only just beginning. Ireland, of course, is tied into China's destiny as well. For example, the value of our imports from China is three times as large as our imports from Northern Ireland, and our exports are twice as large.

The Great Recession seems to have exacerbated global imbalances rather than 're-balanced' them. As Roger Bootle points out today, China's strategy seems guaranteed to raise protectionist demands in the United States. Such a move will be easy to defend politically, if not economically. The fact that we have so far avoided a trade war is one important sign of hope in the current crisis. But it is a fragile hope. Thomas Rustici pointed out in a recent EconTalk podcast, that the protectionist measures of Smoot-Hawley back in 1929-30 moved in lock-step with the collapse of the stock market and the onset of the Great Depression. In the end it was the decision of 16 putatively pro-free trade senators to 'switch sides' and approve Smoot-Hawley that brought on the Great Depression.

The recent WEF Global Risks 2010 report did identify the threat from protectionism as an important one, by either developed countries or developing countries:

It also mentions the risk from hacking, by the way (or Critical Information Infrastructure - CII - Breakdown, in the jargon). The tensions arising from the Google-China stand off may not amount to another Sarajevo, but it creates an environment in which small things - events - have the potential to turn the seemingly 'inevitable' (globalisation) into the well-nigh 'impossible' (peaceful re-balancing).