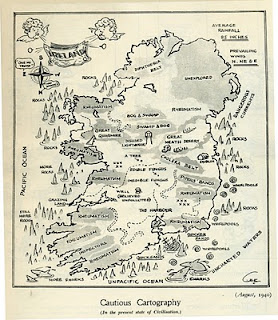 Recession, floods, snow, water shortages. But it could be worse. What if we were about to be invaded?

Seventy years ago - in 1940 - Ireland faced the prospect of invasion: and not just by the Germans. In his thought-provoking book What If? Alternative Views of Twentieth-Century Ireland Diarmaid Ferriter reminds us that Irish defence forces were so weak (no anti-aircraft weapons, no armoured vehicles and just 7,000 poorly armed soldiers) that the British government worried they might have to invade the Free State in order to 'protect' it from a German invasion. Going so far, Ferriter explains, as to issue tri-colour armlets to British soldiers based in Northern Ireland at the time.

But the Irish had a clever plan - as we are reminded by the delightful map above from Strange Maps - namely to dissuade any prospective invader by making the country seem so unattractive as to not be worth the bother of invading. And it worked, apparently. Which is why I'm free to write about it and you're free to read about it.

Puts our own problems in perspective, come to think of it.

(BTW: if you like alternative Irish history then you'll enjoy the RTE archive of 'What If?' lectures from recent years.)
Posted by Gerard O'Neill at Monday, January 25, 2010