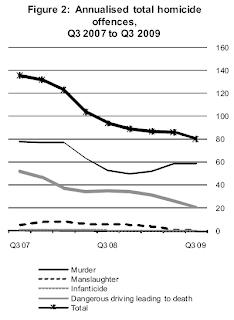 It seems this recession is challenging some old hypotheses about the relationship between poverty (especially unemployment) and crime. Causality used to go one way: from poverty to crime. But could it go the other way? In the United States, instead of a recession-induced crime wave there appears to be a crime wane. The same is happening in the UK.

The latest CSO statistics show a reassuring fall in violent crimes, shown in the chart. And while some categories are up - such as burglaries - and therefore 'explainable' in terms of rising unemployment; other, much bigger categories have fallen steeply such as criminal damage and disorderly conduct. So does economics influence crime?

Anti-Dismal argues that New Zealand economists are at a loss to explain the unemployment-crime relationship. But here in Ireland we have a better idea thanks to work at the Geary Institute. It all boils down to the supply of potential criminals: specifically, young men (key word here is 'potential' I hasten to add). But their supply peaked some years ago, and so the number of potential criminals is falling, as - coincidently - are the number of flathulach consumers.

Crime is still a problem, of course. Especially for its victims. But the other victims of crime are the families of the criminals. Families without fathers are more likely to experience poverty than those with fathers. Which is why providing jobs for young men is of such benefit to society: not just in terms of economics, but also in terms of family life and the next generation.
Posted by Gerard O'Neill at Wednesday, January 13, 2010