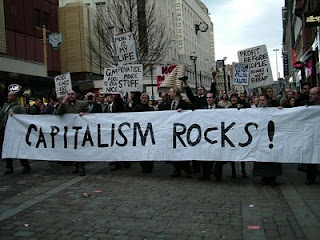 The Noughties were good for capitalism, on balance. Tyler Cowen points out that - outside of USA and parts of Western Europe (including Ireland) - the past decade has seen capitalism deliver the goods for hundreds of millions of people. But we tend to be parochial about these things, magnifying our own difficulties in the West whilst ignoring or under-appreciating extraordinary successes in the East. As he puts it:

One lesson from all of this is that steady economic growth is an underreported news story — and to our own detriment. As human beings, we are prone to focus on very dramatic, visible events, such as confrontations with political enemies or the personal qualities of leaders, whether good or bad. We turn information about politics and economics into stories of good guys versus bad guys and identify progress with the triumph of the good guys. In the process, it’s easy to neglect the underlying forces that improve life in small, hard-to-observe ways, culminating in important changes.

Even in Ireland we'll likely get back to a 2005-2006 standard of living in the next 24 months: not quite the failure of free market capitalism some like to portray. Indeed, if markets have failed so dismally, how come five out of six people in the private sector still have jobs two years into a vicious recession? They must still be creating goods and services that others are continuing to buy? The market keeps working (I'd suggest a visit to your local shopping centre if you doubt me).

Nevertheless, the West-East shift is set to continue, exacerbated to some extent by the Great Recession. Liam Halligan is right when he observes in today's Daily Telegraph that:

The dire performance of Western assets markets over the last decade is unprecedented. It severely challenges the long-standing view that holders of equity, if they're patient, will do well. If pondered upon, and assessed honestly, it also unsettles the assumption, hard-wired into our political and cultural mindset, that our part of the world will keep getting richer.

Contrast this sorry tale of wealth-loss with the fate of the large emerging markets over the last decade. Off the back of a manufacturing miracle, China's Shanghai Composite Index of leading shares gained no less than 140pc over the last 10 years. India's Sensex 30, the main index on the Bombay stock exchange, is up 249pc - the result of the country's IT and outsourcing skills.

... Back in 1990, the "advanced" nations – effectively Europe, the US and Japan – controlled around 64pc of the global economy, as measured by gross domestic product. They now control 52pc – a huge loss of economic influence in a very short period of time. Most of that shift happened during the last 10 years.

... Not so long ago, the US was the world's biggest creditor. It is now, by a long way, the biggest debtor. Other big Western economies have followed America, spending the last 10 years borrowing money from the Eastern economies to fuel irresponsible increases in public spending.

As a result, the big-four emerging markets, known as the BRICS, now hold no less than 42pc of the world's total reserves. The G7 countries, in contrast, hold only 17pc. Take away Japan, the only substantive creditor nation among that group, and the "club" of advanced countries – including the US, UK and France – holds only 4pc of the world's reserves in their respective central banks.

Welcome to the New World Re-Ordering, and it has only just begun.

Here in Ireland we are culturally 'Soft Left' (though there are a few of us on the 'Cuddly Right' I'm glad to say). So the default setting is 'more government' whenever there's a problem: despite copious evidence that our politicians and civil servants are simply not up to the job (and most of the time it isn't there job any way). Irish businesses - like businesses elsewhere - do a lousy job of justifying their existence in the face of this culture. The Economist calls this The Silence of Mammon (may require a subscription - and worth it at twice the price!):

More ambitious defenders of business have advanced two arguments. The first is that many firms are devoted to good works. They routinely trumpet their passionate commitment not just to their various stakeholders (such as workers and suppliers) but to the planet at large.

... The second argument is more hard-headed: that businesses have done more than any other institutions to advance prosperity, turning the luxuries of the rich, such as cars a century ago and computers today, into goods for the masses.

... The problem with the first argument is that it smacks of appeasement. Advocates of corporate social responsibility suggest that business has something to apologise for, and thus encourage its critics to find ever more to complain about. Crocodiles never go away if you feed them. The problem with the second argument is that it does not go far enough. It focuses exclusively on material well-being, and so fails to engage with people’s moral qualms about business.

So what to do? The Economist suggests three better arguments:

The first is that business is a remarkable exercise in co-operation. For all the talk of competition “red in tooth and claw”, companies in fact depend on persuading large numbers of people—workers and bosses, shareholders and suppliers—to work together to a common end. This involves getting lots of strangers to trust each other.

... Another rejoinder is that business is an exercise in creativity. Business people do not just invent clever products that solve nagging problems, from phones that can link fishermen in India with nearby markets to devices that can provide insulin to diabetics without painful injections. They also create organisations that manufacture these products and then distribute them about the world.

... A third defence is that business helps maintain political pluralism. ... Only 202 of the 500 biggest companies in America in 1980 were still in existence 20 years later. Anti-capitalists actually have it upside down. Companies actually prevent each other from gaining too much power, and also act as a check on the power of governments that would otherwise be running the economy. The proportion of the world’s governments that can reasonably be called democratic has increased from 40% in 1980, when the pro-business revolution began, to more than 60% today.

And the revolution continues, buoyed on by the Eastward shift in global economic gravity now under way. Irish businesses can (and will) play a part in the extraordinary task of raising the living standards of billions of people throughout the world by profitably meeting their needs. We should be proud of that - and celebrate it at the start of a new decade of opportunity.