The Future will be Integrated 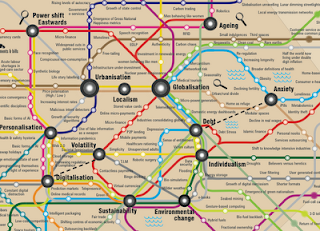 Robin Hanson on the future:

Truth be told, folks who analyze the future but don’t frame their predictions or advice in terms of standard ideological categories are largely ignored, because few folks actually care much about the future except as a place to tell morality tales about who today is naughty vs. nice. It would be great if those who really cared more directly about the future could find each other and work together, but alas too many others want to pretend to be these folks to make this task anything but very hard.

He's right of course. Most people really don't care that much about the future - and they care even less here in Ireland in my experience. As Hanson would say, most people's forecasts about the future are simply ways of signalling their suitability to 'lead' their audience to the future. Even if they haven't got a clue where they're going. Politicians, for example.

But there are serious folks thinking about the future: Richard Watson is one. I love his 2010-2050 Roadmap for the Future: a clever play on the brilliant linear diagram of the London Underground designed by Harry Beck (download the pdf of the 2050 Roadmap to appreciate the details). Richard creates a visual space in which to explore the interplay of 16 different trends over forty years. And he doesn't reduce it to 'morality tales'.

It would be intriguing to envisage something similar for Ireland. Say, one building on the work of Stephen Kinsella (see his recent Irish Times article). Of course, we'd have to use a map of Dublin's transport system ... hmm. Still, we could include a wild card forecast for the successful introduction of integrated ticketing on, say, New Year's Eve 2049. We're bound to be a smart economy by then.
Posted by Gerard O'Neill at Monday, January 04, 2010