An Inquiry into Ignorance 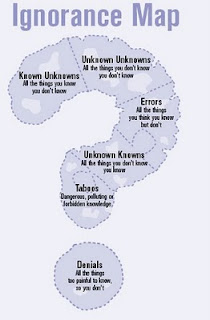 The proposed banking inquiry (or rather, two reports preceding a Statutory Commission of Investigation) may well have therapeutic value. Blame will be allocated; the past will be put behind us; we'll move on.

But I'm not expecting much else. Certainly not more original and more accurate insights into what actually happened than we have already. Nor am I expecting the main players in the catastrophe - the bankers themselves - to shed any more light on the matter.

The usually brilliant Epicurean Dealmaker gives an insight into the nature of the people - bank CEOs in the main - at the centre of the financial storm in the United States in a recent post:

They are damn smart; scary smart, in fact. You don't get to the top of the greasy ladder of a major global investment bank's executive suite by being dull, incurious, or lethargic. People like that get sliced to ribbons and thrown into the chum bucket in my industry before they reach Managing Director, if they ever get inside in the first place. These guys got game, people. Serious game. You would be foolish to doubt it.

But they also have absolutely no interest whatsoever in the whys and wherefores of the financial crisis, the proper size and role of banks and investment banks in the domestic economy, or the moral imperatives inherent in stewarding the financial plumbing undergirding the daily lives and livelihoods of six billion people. For one thing, they don't have time to worry about such things. Most of a senior bank executive's time is consumed competing against other scary-smart investment bankers and executives at other firms, who are hell-bent on grinding his bones into dust beneath their bloody heels, while trying to prevent his own firm from flying apart under the internal stresses generated by thousands of egotistical prima donnas all scrapping for more than their fair share of the pie. There is too much going on, and unrelenting change comes too fast and furious to allow quiet contemplation of the order of things.

... For another thing—and because the volatile, high velocity nature of the business attracts such people—the people who go into the industry are not really interested in thinking deeply about why things are the way they are. You will almost never find an investment banker "sicklied o'er with the pale cast of thought." It's just not in their genetic makeup to be reflective, introspective, or speculative in an intellectual sense. Investment bankers have almost no interest in why things are the way they are. Rather, they spend all their considerable intellectual and psychological resources on understanding how they can take advantage of the way things are.

So there you have it. The banking inquiry will be an inquiry into ignorance - or 'known unkowns' if you prefer. In which case the results are a foregone conclusion, even before we find "an independent 'wise' man or woman with relevant expertise" to lift the veil.
Posted by Gerard O'Neill at Saturday, January 23, 2010