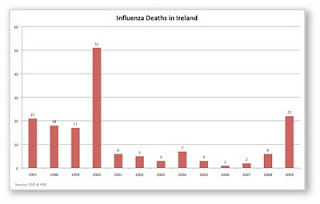 2009 was the year of the swine flu. Sadly, 22 people died last year from swine flu in Ireland, according to year end reports. But it was not the worst year for flu in recent years - not by a long shot. Back in 2000, as the chart shows, more than twice that number died from influenza according to CSO mortality statistics. There were a total of 51 deaths attributed to influenza that year. 2009 certainly stands out by comparison with 2001-2008, but is on a par with 1997-1999.

So are we out of the woods yet? Was the great swine flu panic overdone (like all the other noughties panics)? Probably not. Although Ireland has had a less severe problem with swine flu than other countries (Iceland is the worst affected on a per capita basis); we need to be aware of the seasonality of influenza. The first quarter of every year is usually the worst for flu deaths: 49 of the year 2000's 51 deaths occurred in Q1 2000. The cold weather probably doesn't help (especially for the elderly, who remain the most vulnerable, swine flu or any flu).

So if you are in one of the vulnerable groups, it's not too late to get the vaccine. Better safe than sorry and all that.
Posted by Gerard O'Neill at Wednesday, January 06, 2010