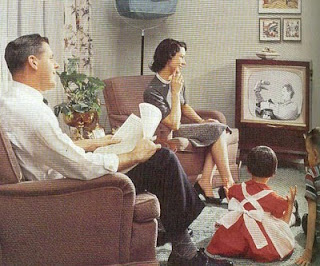 I am more hopeful about the future of Ireland's middle class than David McWilliams. David frets in today's Irish Independent that:

Fianna Fail has placed the middle classes in a 'debtor's prison' and, what is more egregious, it has given the middle classes the bill for the mistakes of Fianna Fail's developer mates because it is obsessed with keeping the banks afloat in their present crippled state.

This 'debtor prison' approach to financial mistakes will bankrupt the middle classes. Today the average Irish family owes €132,000 to the banks. This huge debt overhang, taken together with tax increases and cuts in real wages plus the prospect of families supporting their unemployed children who are living at home, and what we are looking at is nothing less than the shattering of the Irish Dream.

The Irish Dream, like the American Dream, is based on the notion of a progressive conveyor belt of prosperity whereby each generation becomes better off than the generation that came before them. It is an idea rooted in the expectation of progress and the hope that aspirations can be translated into real results, traditionally with the help of increased family investment in education.

I think he overstates his case. Firstly, the average family's debt obligations are the equivalent of just 2.7 years of average household disposable income (€49,043 according to the CSO's SILC 2008 report). Sure, the average family could not afford to pay off its debts in one fell swoop - but who could? Most of their debts are long term mortgages. They will be paid off by the middle classes over time just as they always have been.

Nor is there anything in the current circumstances that severely hinders continuing investment in education. We already have the highest level of share of population in education of any country in the European Union (according to Eurostat), and our level of participation in education beyond the compulsory school age is also high (85% of Irish 18 year olds are still in education versus just 50% of British and German 18 year olds).

I think the Irish middle class are made of tougher stuff than David gives them credit for. They need to be, for they are the bulwark of freedom in any democratic society. James Poulos has it right I reckon:

For Aristotle, the presence of a middle class was essential to political liberty. The typical explanation of why focuses on the way that Aristotle’s middle class combined a bourgeois interest in stability with a rather upper-class property interest. Unfortunately, the typical explanation stops here; few bother to ask why middle-class people have these interests as a rule. What is the specific characteristic middle-class interest in stability and property, and what is driving it? I think the plain answer is that the middle class is defined by middle age — by those who are no longer young but not yet old ... I can’t conceive of a middle class defined by middle age whose particular interests in stability and property aren’t defined by the creation and/or continuance of family. The middle class, conceptually and in practice predominantly, is the class of people who are starting to have kids and raise them.

As it happens, Ireland is one of the few developed countries with a birth rate above replacement levels (the United States is another one), indicating a thriving middle class. We are producing plenty of the 'ultimate resource' - as Steven Malanga puts it - which means that we will have available the key resource in expanding productivity and prosperity in the years ahead. He quotes Greg Mankiw's observation that “Those who fear overpopulation share a simple insight: People use resources. The rebuttal to this argument is equally simple: People create resources.”

And so it goes with the Irish middle class: we create resources (including more members of the middle class). And in doing so we have a vested interest in liberty. Though I do agree with David on this: if we are wise we'll ensure we don't (continue to) elect politicians who then squander the wealth and resources we create.

By the way, here's one example of middle class creativity, from a time when people had rather fewer assets than we do today - happy birthday Wolfie!