Breaking Through the Reality Barrier 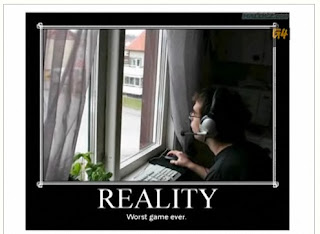 In his talk, Professor Schell starts with all the recent developments that have recently broken through the 'reality barrier' between games and reality, e.g.: the wii. Developments he's happy to admit most people in the gaming industry did not foresee (especially the huge success of Facebook games). But then he talks about the future and that's when it gets really, really interesting. The future, of course, is already here, just not evenly distributed (as Gibson once said). One example he gives is the new Ford hybrid car. It has a 'virtual tree' in the dashboard screen (see image below), that 'grows' as you drive in a manner that maximises the economising functionality of the hybrid engine:

In other words, your real world behaviour starts to emulate the features of a reward-based, virtual world game!

Schell then proceeds to list all sorts of behaviours and experiences that could be tied to virtual reward schemes, ranging from shopping behaviour (obvious) to exercise behaviour (affecting insurance premiums) to your children's study behaviour (affecting their performance and your tax allowances). One teacher he mentions has turned his class evaluation form into a game-style scheme whereby students attain higher and higher levels the more 'points' they get: it has been hugely effective in improving student performance. As Schell says himself, we are only at the start of applying the insights of behavioural psychology and economics to these new hybrid, reality/virtual games and schemes.

And here's a thought he got me thinking: instead of penalty points for bad driving, wouldn't it be better if we gave out bonus points for good driving? Tied directly to insurance premiums?