Debt In The City

It wasn't supposed to end this way. 'Girl Power' meant having it all: the job, the shopping and the apartment. And it did - for a while. But the dream has become a nightmare for a generation of young, single Irishwomen, trapped in negative equity. That's according to a Research Technical Paper from the Central Bank on How are Irish households coping with their mortgage repayments? Information from the SILC Survey. Though admittedly the authors don't spell it out quite so starkly, but they do say this about the burden of mortgage debt:

Sex in the City has become Debt in the City for tens of thousands of singletons in our cities and towns. How did it happen? As I've observed before, the surge in household indebtedness was driven by rising female participation in the workforce. The chart below shows that it wasn't just married women who saw their participation rate rise during the boom, single women reached even greater heights: 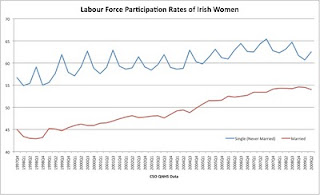 So what is to be done? One obvious solution for over-stretched singletons is to get married - though the Central Bank researchers don't quite come out and say this. They do however show that married people have far lower levels of mortgage indebtedness and overall vulnerability than single people. There's only one problem: the percentage share of Irish females who are not married (single, separated/divorced, widowed) is returning to levels last seen in the 1920s and 1930s, as the next chart shows: 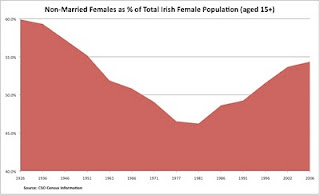 The same goes for men of course. But as I've noted recently, men are the new 'manority' and marriage is not something most of them are contemplating - or even capable off financially right now. Our grotesque love affair with property in recent years has ended in this: our young women and men are trapped in 'relationships' with debts from which they can't break-up. It wasn't supposed to end this way.
Posted by Gerard O'Neill at Friday, February 19, 2010