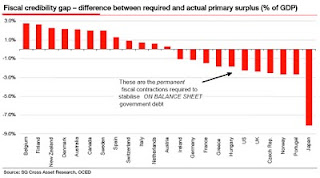 Apparently heroin addicts can become so drug dependent their bodies cannot withstand the shock of withdrawal, and failure to continue taking the drug triggers multiple organ failures. I just wonder how apt that analogy is to our governments' debt dependency today. As long as governments think that taking these difficult decisions to end the addiction will be easier in the future than it is today, they will never take the decision today. At the very least, there will have to be a sufficiently large bond market event to force the issue.
Dylan Grice

The quote is from a fascinating paper - Popular Delusions: Government Hedonism and the Next Policy Mistake - which spells out just how severe the sovereign debt problem has become for different countries. The chart shows the fiscal credibility gap for different countries, and it compares the primary balances governments should be running with those which they're actually running, to get a better feel for the challenges governments face in order merely to stabilise their on-balance sheet debt ratios.

Reassuringly, Ireland is not in as a bad a position as most other countries to the right of us in the chart (especially the UK). That's partly due to the decisions that have been taken in recent budgets, and to our more benign demographic outlook versus, say, Japan.

I believe Irish voters would rather take the foul-tasting medicine now than bequeath an even bigger mess to our children. Which is why ideas like an Irish Fiscal Policy Council, proposed by Philip Lane, makes a lot of sense. This chart from his recent presentation on the topic spells out the basic steps necessary to close the credibility gap identified by Grice: 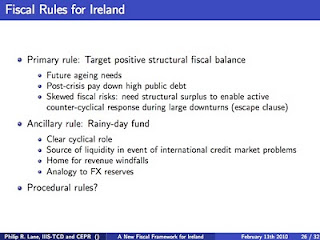 Easier said than done given our stagnant and dysfunctional political system. But at least it tells us where we need to go. Pity George isn't here to show us how to get there ...
Posted by Gerard O'Neill at Saturday, February 13, 2010