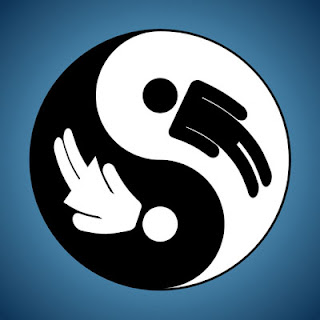 I used to think that equality boiled down to a simple concept like 'the majority versus the minority'. But now I realise there is a third category: a 'manority'. What is a manority? It is a special measure of equality that applies only to men: and it isn't very equitable.

You get the picture. So has this provoked an outcry of indignation at the inequalities suffered by men in Ireland? That's a rhetorical question by the way. Of course not. Instead we get the standard indignation at the continuing inequalities 'suffered' by women in the form of lower wages (apparently the result of evil male employers), and their under-representation in politics and senior management.

The politics one amuses me. Women are the majority of the electorate in Ireland - and have been since a newly independent Irish Free State introduced universal suffrage in 1922 (six years ahead of their sisters in Northern Ireland and the rest of the UK for that matter). In fact, women are the majority of the electorate in every democracy in the world. Yet women don't make up the majority of politicians even in the gender-nirvana of Scandinavia. Which sort of suggests that a) the gender imbalance in politics is not an issue for the vast majority of women, and b) women choose their political representatives on the basis of things other than XX vs XY chromosomes.

The under-representation of women in senior management in the private and public sectors is subject to the same forces. Women now make up the majority of the workforce in the United States. I expect they'll make up the majority of Ireland's workforce by the end of next year (and that, of course, will be a good thing). Will this translate into a majority of women in senior management at some future date? Here the outlook is less certain. Most women will want to have babies, in which case they will not be willing to put in the same hours as men do in order to progress to senior management positions (and to stay there). The opportunity cost is too high for many women.

On the other hand, having babies and opting out of employment for a time assumes an alternative source of income. Traditionally that used to be called a husband. That's a tradition which, if not dying out, is certainly under threat. For example, figures earlier this week showed that the marriage rate in England and Wales has fallen to the lowest level since records began in 1862: 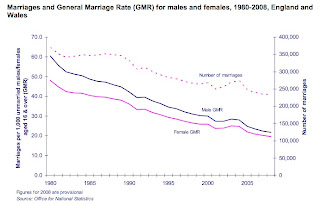 The CSO does not publish the general marriage rate (GMR) for Ireland (i.e.: the number of men or women marrying per 1,000 unmarried men or women aged 16 or over), but I estimate that Ireland's female GMR was 24.3 in 2008, somewhat higher than the UK's female GMR of 19.6. We're about nine years behind the UK as that trend goes. Moreover, the marital status of Ireland's adult population is reverting back to what it was in the 1930s and 1940s. Back then, just over half of all women (and men) over the age of 15 was single according to census data. This plunged to just a third (34%) of Irish women in 1981. But by late 2009, according to data from the Quarterly National Household Survey, we were back to nearly half of all women (49%) being single. It will likely become a majority in the next year or two.

What is going on? Explanations vary. Charlotte Allen thinks we have gone back to The New Paleolithic, with a majority of women pursuing a minority of alpha males, driven by their innate hypergamy. Mind you, more cavewoman than caveman this time. In other words, we seen to be heading towards a sexual dystopia brought about by the pill, affluence and feminism. Others go further, and see the prevailing gender divide becoming a gender chasm, peaking in a misandry bubble as men become a repressed minority and turn away from the heavy lifting necessary to maintain the economy, society and civilisation.

Even some economists are worried. The monogamous family turns out to be the most efficient human institution yet invented for the raising of children and the propagation of the species. But our new era of 'blended families' will test unproven, possibly less effective alternatives:

Societies which adopt a belief system that supports the family are likely to outgrow otherwise comparable societies that do not. Our analysis predicts that, in societies with strong family-based religious norms, the family will be the dominant form of family life, whereas in societies in which family-centred norms are weak or not enforced, the fidelity family is expected to coexist with other family types.

It may not be a coincidence that virtually all the surviving world religions emphasise the centrality of the family. It will be interesting to see whether or not the family continues to have evolutionary advantages over other forms of mating when religious beliefs are weak and fatherhood uncertainty can be at least partially resolved through DNA paternity testing.

More immediately, if young men no longer feel that they are likely to marry (too many betas, not enough alphas), then they may simply become slackers, exacerbating the trend towards fewer men going on to third level, and higher male unemployment rates.

Which brings us right back to equality and all that. Perhaps in time the politically correct shades will fall from the eyes of our commentariat and they will see the disaster that is unfolding for men. They might even start to champion 'manority rights'. Though I have a terrible feeling it will be too little, too late when they do.
Posted by Gerard O'Neill at Friday, February 12, 2010