The Opportunity Cost of Politics 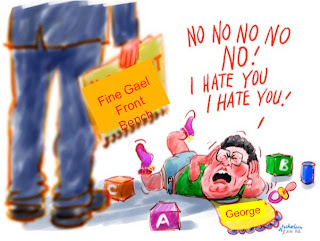 There is an obvious economic explanation for George Lee's decision to throw his political toys out of the pram: the value of his 'assets' would have declined sharply by the time of the next election and he therefore decided to protect their value by returning to private life. His assets being his intellectual credibility and reputation (and the profile that went with them). He was finding that the opportunity cost of staying in politics was rapidly exceeding the benefit of same. That's one explanation anyway.

There is another, somewhat less 'economistic' explanation. Watching George on RTE last night I was struck by the emotional intensity with which he described is prior hopes and dreams upon entering politics. Which unfortunately stood in marked contrast to the decidedly less intense experience of life as an opposition backbencher. And unfortunately politics has become simply a contest of competing emotions - not of ideas or ideologies. Dalrymple, as always, puts his finger on it:

The cultural development in question is the systematic over-estimation of the importance not so much of emotion, as of the expression of emotion – one’s own emotion, that is. The manner with which something is said has come to be more important than what is said. Saying nothing, but with sufficient emotional vehemence or appearance of sincerity, has become the mark of the serious man. Our politicians are, in effect, psychobabblers because we are psychobabblers; not the medium, but the emotion, is the message.

To paraphrase Terence MacSwiney, it's not those who think the most, but those that complain the most, that shall prevail. But only up to a point. In the end, George Lee's departure represented a failure of imagination. A failure on the part of Fine Gael, obviously, but more so a failure on the part of George Lee. Firstly a failure to imagine what it was he was letting himself in for when he entered politics (surely his career spent interviewing politicians must have given him some insights?) A failure to negotiate a 'deal' with Enda Kenny before standing for election that he could have either insisted on enforcing or have legitimately walked away from if it was not honoured (but I don't sense there was one). And most importantly a failure to organise. George was (and is) a celebrity in the sense of being a one-man-band of energy, activity and opinion. But in politics that is not enough.

His biggest failure in the end was his failure to build an organisation and to channel the genuine hope and commitment of thousands of people who would have given him far more political clout than any front bench portfolio in opposition. It might even have been the catalyst for the political and economic transformation he seemed so earnestly to have wanted.

I just hope for him personally that his assets are not in negative equity by the time the dust has settled.
Posted by Gerard O'Neill at Tuesday, February 09, 2010