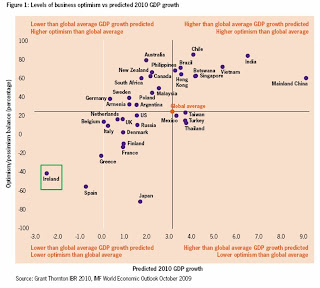 It feels like the wheels are coming off the government's NAMA strategy. That's a double tragedy because a) the problems NAMA is trying to fix still need fixed and b) a lot of people - business owners in particular - need the certainty of a 'solution' before they can back on a path to recovery. That's probably one reason why Irish small businesses are among the least confident in the latest Grant Thornton IBR survey (graph compares confidence to the economic growth outlook).

Maybe make that a triple tragedy: because the foundations for sustainable, long term recovery will be laid down in the short to medium term as businesses (elsewhere) begin to cautiously invest in capital equipment, training and new staff. Except in Ireland it would seem.

But all is not lost. The same Grant Thornton survey shows that Ireland ranks number 1 among 36 countries when it comes to the percentage of privately held businesses saying they are focusing on new target markets in preparation for an upturn in the global economy (75% of all Irish businesses). Which makes a lot of sense, for as another study - by the IBM Institute for Business Value in this instance - shows, by 2020, the world will have 500 million members of its 'cosmopolitan elite' (including Ireland), and another 2.1 billion members of a burgeoning global middle class:

Ireland will get to the future eventually, even if 'regime uncertainty' continues to postpone the future for Ireland's hard pressed businesses and their employees.
Posted by Gerard O'Neill at Monday, February 22, 2010