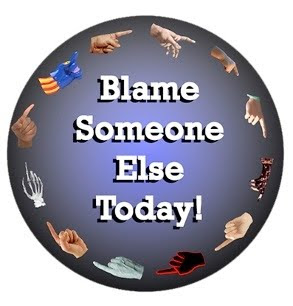 Today is National Blame Someone Else Day. The Irish Independent gets into the spirit of things with it's lead headline today:

No one gets the blame for €426m docks farce

No surprise there. Still, part of me wonders whether the daily drip feed of egregious incompetence and excess that we are now being fed will temper the famous Irish appetite for a free lunch (at the taxpayers expense)? Perhaps, though I think it'll take a while longer. As P. J. O'Rourke reminds us (channelling Milton Freidman), people tend to have four different ways of spending money, depending on whose money:
I'd apologize for the vulgarism, but then it was him what said it, not me.
Posted by Gerard O'Neill at Friday, March 26, 2010