The Government Will Make You Happy 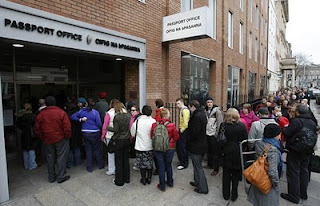 Should we outsource the operation of the Passport Office to Mossad? According to their website they 'plan and carry out special operations beyond Israel's borders'. It's just a thought: after all, they seem to have the, er, technical capabilities.

But perhaps I'm going too far: sure hasn't the The Department of Foreign Affairs warned employees at the Passport Office they may not be paid from today if they refuse to attend to the public counter. And mummy won't read them a bedtime story either. That'll whip 'em back into place to be sure.

But it raises a bigger issue: why does the state need to employ people directly to operate the Passport Office? Sure, there are security and other concerns: but the state regularly uses private operators to provide security-critical services (e.g.: special DNA analysis laboratories). The protocols and procedures for ensuring the proper protection of privacy and security are well established. And the nice thing about outsourcing to private contractors is that you can fire them if they don't do the job you're paying them to do - rather than pretend they 'may not' be paid.

And there's an even bigger issue: does letting the government do more for us make us happier? 'It depends' is the short answer. According to a recent paper by Zohal Hessami, there is a U-shaped relationship between government size and well-being: people are happier at below average levels of government spending (relative to GDP and other measures) or at higher levels, but are much less happy around the middle.

Given that Ireland is unhappily caught in the middle, and in danger of becoming what Lord Tebbit calls (in the case of the UK) a land of quangocrats and hereditary welfare junkies, then perhaps now is the time to move decidedly to the, er, 'left' of the U-curve? We might all be happier for it. Especially anyone in need of a passport.