Indebted To Our Children 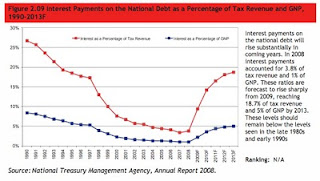 Here's one for the 'silver linings' collection: at least with a growing population the legacy of our credit-fuelled blow out will be a lot more affordable than if our population was shrinking.

The point is made in a recent post over at Worthwhile Canadian Initiative who observes that the critical measure is not the Debt/GDP ratio but rather the 'Cost-of-Servicing-the-Debt'/GDP ratio. Even a modest rate of population growth means that a country can handle a multiple of debt compared to a country with zero or negative population growth.

The chart is from an NCC report last year - the blue line shows projected interest payments on the national debt as a percentage of GNP. It will be higher than in recent years, but not as high as the early 1990s. Add in continuing population growth (likely unless emigration returns to late 1980s levels), and the outlook for debt affordability looks more positive for Ireland than for countries with falling populations. Like, er, Greece.

Of course, there's the opportunity cost of paying off the debts with taxes that could otherwise be spent on schools, hospitals and nuclear power stations. But then there's a cloud with every silver lining ...
Posted by Gerard O'Neill at Wednesday, March 10, 2010