You don't expect recessions to be 'good' for babies, but this one is - at least in Ireland. The latest CSO data shows that the number of births rose in Q3 2009. Is this a leading indicator that the recession is over? As I've mentioned before, there does appears to be a link between consumer confidence and birth trends.

The charts below updates previous information I've posted about the combined number of monthly live births in the Rotunda and National Maternity Hospitals* (which together account for a quarter of all births in the state). Firstly the total number of births trend remains positive but has levelled off somewhat: 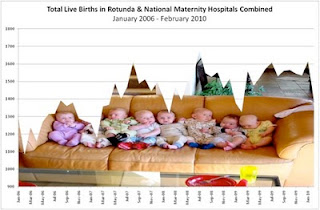 But before we can determine the impact of the recession on birth trends we have to strip out seasonality - which is quite marked as the next chart shows (showing the number of births in each month over four years as a percentage of average monthly births over the same period): 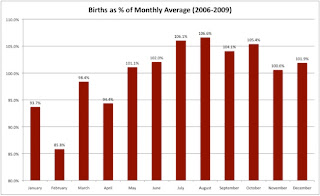 If you want the undivided attention of the midwives then February remains a good month to have your baby! July and August are the peak months for births, the result - obviously - of dark nights and early bedtimes the previous October and November ...

But aside from seasonality and nature taking its course, does the state of the economy affect birth trends? It is well known, for example, that stress reduces fertility (it may cause up to 30% of all infertility problems), so you would expect a recession to reduce the number of births regardless of other, demographic factors. Sure enough, my own analyses of the monthly Rotunda/NMH data does show a significant relationship between consumer confidence (lagged 9 months for obvious reasons) and the rate of increase or decrease in the number of births (stripping out seasonality).

The chart below plots the ESRI's monthly consumer confidence index (lagged 9 months) against a twelve month moving average of the annual rate of increase/decrease in the number of births in the two hospitals: 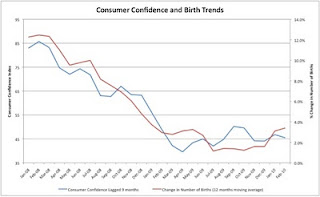 Not surprising there is a high and significant correlation between the two series (r=0.85).

There's only one problem of course. The recession isn't over yet: we can see that from the recent unemployment, national accounts and trade data. But we know that consumer confidence is affected less by the level of unemployment than by the trend in unemployment. So it would seem that more and more couples decided early in 2009 that the worst was over - or would be over by the time their new family member came along.

All of this is good news in the long run, not just in the short run. It means that we can anticipate a growing Irish population in the decades ahead - in marked contrast to many other European countries. Curiously enough it also means that this will be an island-of-Ireland phenomenon, as pointed out in a recent Ulster's Doomed! post on Northern Ireland's latest birth statistics.

We'll have had a good recession if we do indeed get through it with a rising population. That's something to be additionally grateful for as we welcome our newest citizens.

* I'd like to once again thank the administrative staff in both hospitals for sharing this information with me.
N.B.: the most recent monthly data is still provisional.
Posted by Gerard O'Neill at Friday, March 26, 2010