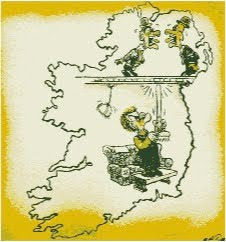 History is the only laboratory we have in which to test the consequences of thought. Etienne Gilson

I keep thinking back to this time one hundred years ago - to 1910. People had no idea at the time what the decade ahead would bring, and not just in Ireland. The following ten years would witness the death of 10 million men in the First World War, the destruction of four empires, and the triumph of communism in Russia. And the start of Ireland's War of Independence. It wasn't that our ancestors were witless or obdurate, they just had other priorities and concerns. Just like we do.

Which brings me to 2016 and the question of a united Ireland. It isn't on anybody's radar. Sure it exists as an aspiration for many (it's even written into the Republic's constitution), but in the course of practical planning and policy making - in Dublin, London or Belfast - it simply doesn't figure. No long-term projection or forecast - by the IDA, or would-be taskforce or any economist for that matter - assumes anything other than 'business-as-usual' for the next ten years in terms of the fundamental political and constitutional architecture on the island of Ireland. Which is reasonable enough as these things go: the future from the perspective of 2010 is uncertain enough without incorporating game-changing scenarios for which we have no precedent.

History, however, suggests this may not be the most prudent approach to adopt. Firstly, there remains a strong desire for a united Ireland on both sides of the border. In a poll I did in January, 55% of adults in the Republic of Ireland agreed that "a united Ireland would, on balance, be better for people on both sides of the border". By contrast, a recent Northern Ireland poll by Inform Communications showed that only 36% would vote for a united Ireland in a referendum, rising to 69% of Catholics. No surprise there. But it does reflect an 'on again/off again' Northern debate (e.g.: on the Slugger O'Toole blog) about these things (and in some of the British media as well, I might add). I'm talking political debate here of course: not the death-worshipping nihilism of CIRA et al.

Of course these are just survey findings. And as an old trade unionist I knew was given to saying, opinion polls are like bikinis, what they reveal is interesting, but what they hide is vital (yes, he was old enough to say such things and not have to issue an apologetic press release afterwards ...) Opinions, being opinions, vary all the time, and in the final analysis they don't 'cost' anything to hold, or to change. What does count are votes expressed in the ballot box: in elections as well as in referenda.

The protocol for deciding on a united Ireland is clear enough. Under the Northern Ireland Act 1998, the Northern Secretary may "by order direct the holding of a poll ... if at any time it appears likely to him that a majority of those voting would express a wish that Northern Ireland should cease to be part of the United Kingdom and form part of a united Ireland". A similar poll or referendum would have to take place simultaneously in the Republic of Ireland.

I think it unlikely the Northern Secretary might exercise such an option on the basis of an opinion poll; or at least I'd like to think he wouldn't. But he might exercise it on the basis of Census results showing a majority of the electorate in Northern Ireland to be Catholic. As it happens, the next Census in Northern Ireland is next year: on Sunday 27th March 2011 to be precise. Next year also happens to be the first time the Census will take place in the same year North and South of the border since 1991 (on Sunday 10th April 2011 in the South). The 2011 census in Northern Ireland (and the UK as a whole) will be the first in which people will be able to complete the census online. So the results will be out quickly ...

In the event that the 2011 census revealed a Catholic majority in Northern Ireland, then the Northern Secretary would certainly come under pressure to hold a referendum within a year or two of the results. Assuming a majority approved the re-unification of Ireland in simultaneous referenda in the North and in the South (the Republic's constitution requires that a majority in both jurisdictions approve re-unification), then a few more years of procedural and legislative arranging could see a united Ireland ... by 2016.

A key question, of course, is whether the 2011 census will show that a majority of the North's population aged 18 and over is Catholic? I suspect not: more recent data than the last NI census (in 2001), such as that on equality from NISRA, certainly indicates a near-majority of Catholics, but by no means an absolute majority. Another obvious question is whether all the North's Catholics would vote for a united Ireland. According to the opinion polls, the majority certainly would vote yes, but a large minority might well abstain or vote no.

So it's one to watch. If there is a referendum on a united Ireland in the next few years then its advocates might note that the 1998 act also requires that the Northern Secretary does not hold another poll for seven years after the previous one. We might be looking at 2018-2019 for the sequel. In which case analyses of the North's school age populations by blogger Ulster's Doomed! (you get the drift) suggest every likelihood of a Catholic majority later in the decade.